HV Flip in Service Menu Accessible at Store, but not on the same TV brought home

Does anyone have any idea why HV Flip within the service menu would be greyed out?
I checked the model at the store and found it accessible, so I purchased it. The same TV brought home, of course did an update, has that option greyed out. I called Samsung support but it's been like pulling teeth to get anyone in the know to call me about this. I've spoken to the support folks that answer the phone 4 times now, but they have no idea and keep, supposedly, routing my ticket to someone more educated in the software of these televisions. Sadly I never hear back. I'll most likely ultimately return this TV in about a week if I can't resolve this.
I have a much larger Samsung TV purchased last year and I can access the HV Flip, but I can't seem to figure out why this one is greyed out, ESPECIALLY, given it was accessible at the store.

Below is an image of the comparison of the same TV where one works and the other doesn't. 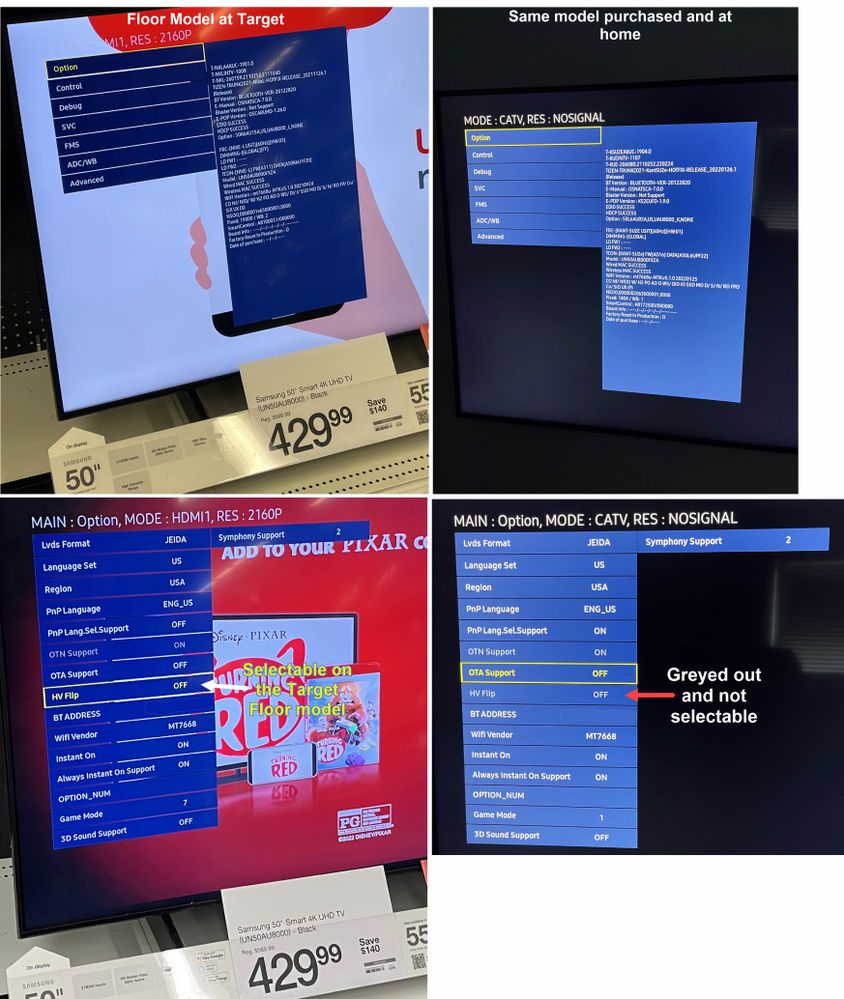 After a week and half of dealing with Samsung support via phone, chat, and even service centers... (8 different people).

Here is the result. After being belittled a few times for even asking, HV Flip is a functionality that will work on any of these TV models, though, the floor model at Target was a European model which was determined by the TYPE (50K6AU1SA) in the service menu. The model (SAME MODEL), but the types available under the service menu determined the TV I purchased to be a US model (i.e. Type: 50L6AU0SA).

For some odd, stupid, and annoying reason the US models, (SAME models sold in Russia, Australia, and Europe) have the HV flip functionality blocked by software and since the types available under that menu are not of any type out of the US, there is no way to unblock the HV Flip.

After that week of pain and suffering I gladly and gleefully returned the TV to Target. I, of course, tried to purchase the Australia/European floor model, but the management at Target refused to sell it to me due to warranty reasons.

So if you're looking to use HV Flip for valid, or who cares, reasons Samsung has decided US customers are not worthy and shouldn't bother asking them why.

Since Samsung refuses to provide this type of information I thought it might be nice to post what I found for those looking to have the option of screen flipping. Here are the models I've come across and learned if they have the ability to use the HV flip option. If anyone knows of anymore please reply and I'll add them onto the table as time goes along.