4K, 8k and other TV's Vertical lines on all sources and during picture test

I have the un55ks8000f, and midway through a video, the screen faded to verticle lines. The audio still played and the lines move, but nothing can be made from them. I looked through forums of other people with similar issues and tried cleaning all the cables and ports. The problem is that these lines show without any source plugged in. No menu or anything can be seen on the tv.

I'm sorry to hear that, but since you did just purchased the TV I would recommend taking it back for an exchange.

I purchased the TV in March 2019. It stopped working in January of 2020. The TV developed a dark vertical bar just right of center. The picture still comes through, but at about 20% the brightness, for a vertical band about 6" wide extending from top to bottom of the TV.

I immediately trouble shooted the problem myself. Power sources, input, makes no difference. The software version is also updated (confirmed with Samsung).

I contacted Samsung in May however at the time the issue was intermittent, only doing this about 1 in 5 times it was turned on. Sometimes it would flicker and only do it for a few moments right when turned on then it would be fine. After speaking with Samsung support we decided not to have it serviced since it wasn't doing it consistently and typically cleared up within about 30 seconds of turning the TV on. I was also under the impression I had a 24 month warranty after a quick google search that said all Samsung TV's purchased after October 2018 had a 24 month warranty. Since that time the TV has progressively gotten worse. As of a few weeks ago, the black bar is constant. It flickers at times but remains there.

I contacted Samsung today, registered the product online, only to learn that it is in fact a 12 month warranty. I also discovered that this forrum is litered with similar experiences from users with other TV's from the 7000 and 8000 series which it sounds like may use similar technology. In most cases, the black bar is in the same location mine is, which tells me there is a trend Samsung must be aware of at this point. I was told by the phone rep I could schedule a service call. But I can see from the forrum that the call alone is $200 in most cases, and that the problem is a bad panel resulting in a repair cost that is greater than the cost of a new television.

This isn't the first time I've had a Samsung panel go bad. However it is the first time I have had Samsung not do the right thing and fix it. I get that the warranty has expired. However the issues started within warranty and had I realized I had a short time frame to get things rolling I would not have post poned repair. My willingness to trust the product to hold up, when it was only acting up for a few moments upon start up, has now costed me a TV.

This is clearly a widespread issue that they are choosing to ignore. I've purchased more Samsung TV's in my life than I can count, beginning with a plasma back in 2007. It is the only television manufacturer I have ever purchased from since, for home, business, everything. I've helped my father and brother furnish their homes and businesses with Samsungs and gotten several others on board with Samsung. I am extremely dissappointed.

I would be happy to look into this further.  Could you send me a private message with your model, serial number and any transaction numbers that you may have?  http://bit.ly/2ihPL97

Similar to other users that are having the same issue with their 55KS8000 tvs, mine just started having vertical green lines on the screen which disables any visual use of the tv. This is having sporadically and is now occuring more frequently.

I updated the firmware to the new update (version 1243), bit still having the issue.

I purchased the tv from the Samsung website on 11/13/2016. The issue started about a week ago. Any help from the mods or anyone else on how to proceed?

I'm sorry to hear that, if this is occurring on all sources and during the picture test this will require service please send me a private message with your full model and serial number? 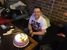 I only really notice them when there is a wide area of one color on the screen. Or at least not a whole lot of visual activity and different colors. They are the most prominent when viewing the screen from the side. A particular one on the left does appear when viewed straight-on. I have performed the picture test and they do not appear there. 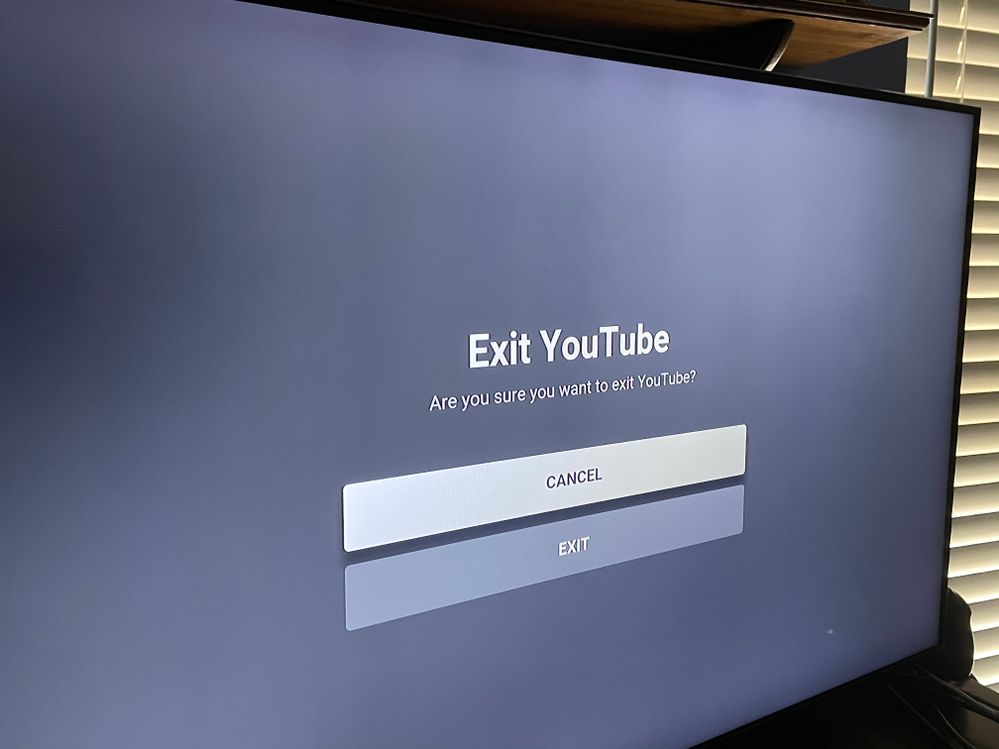 In the center of the screen. Above “Exit YouTube.” 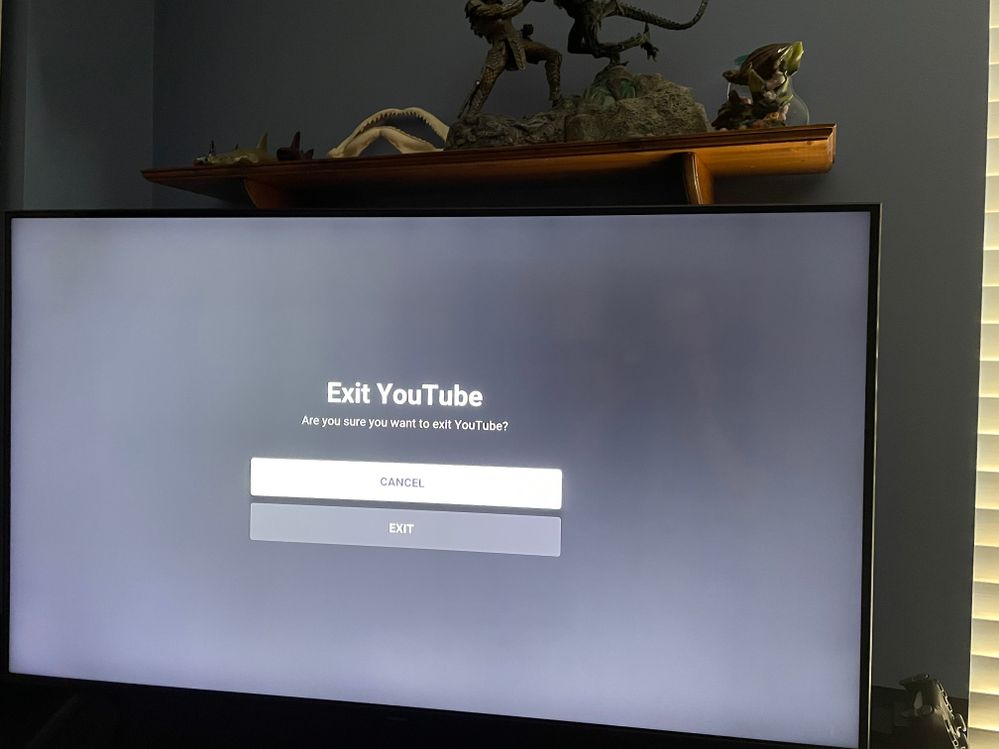 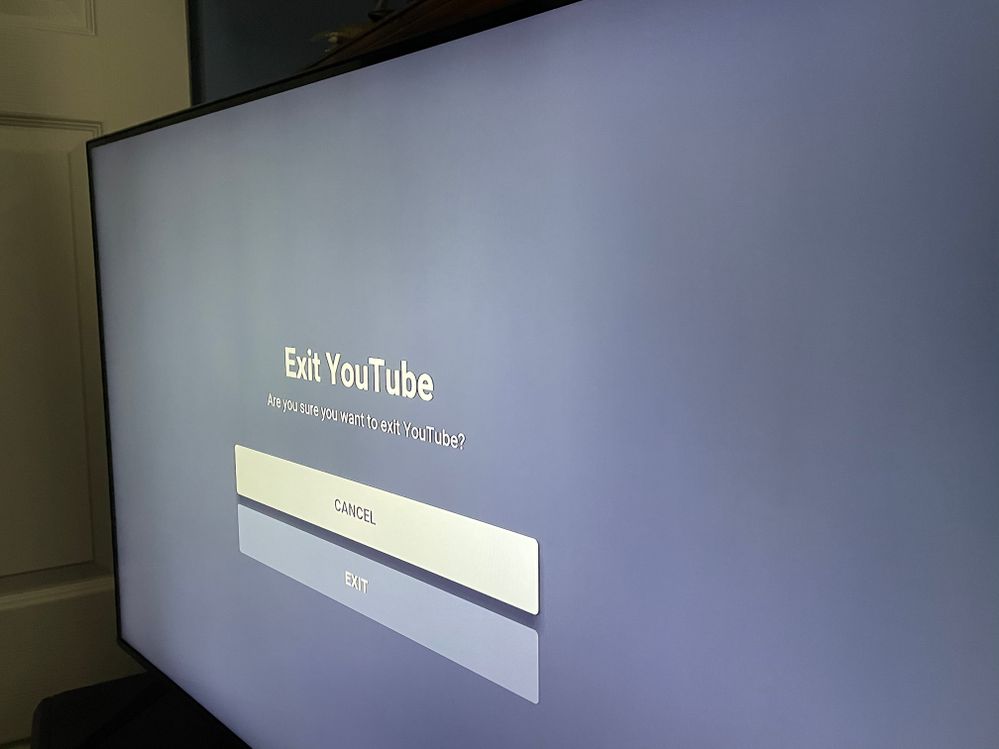 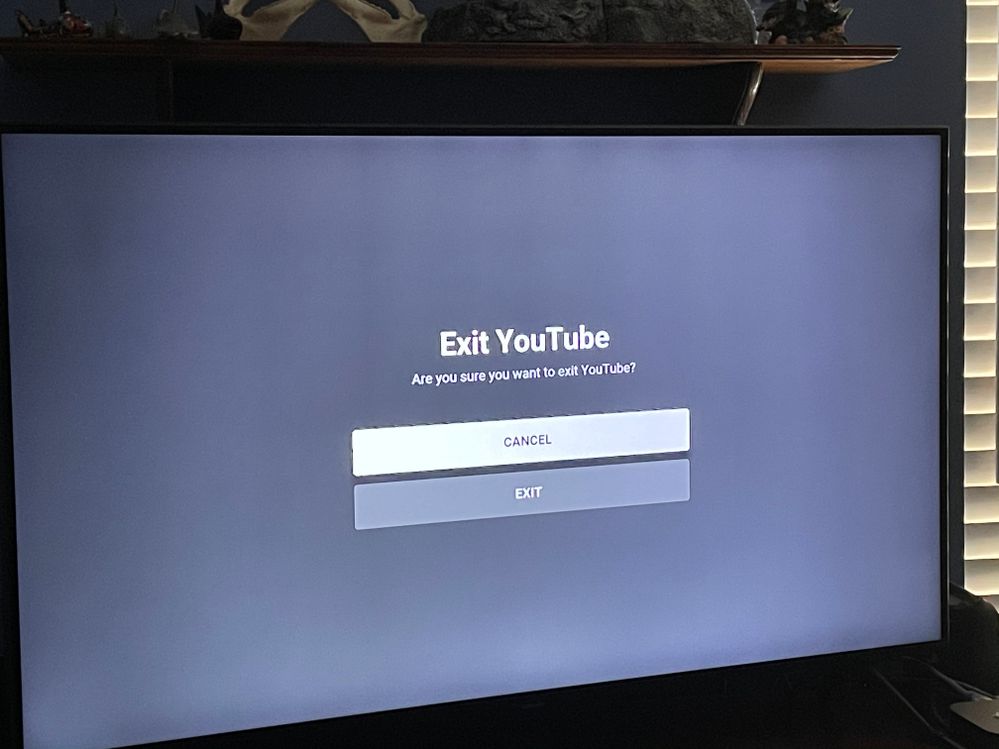 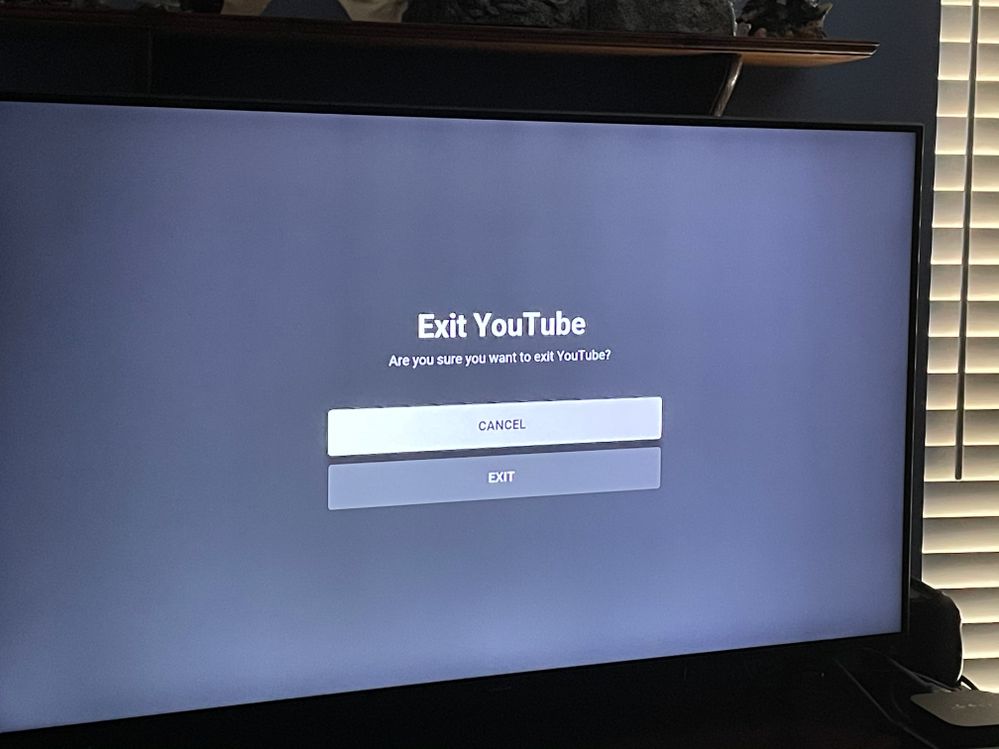 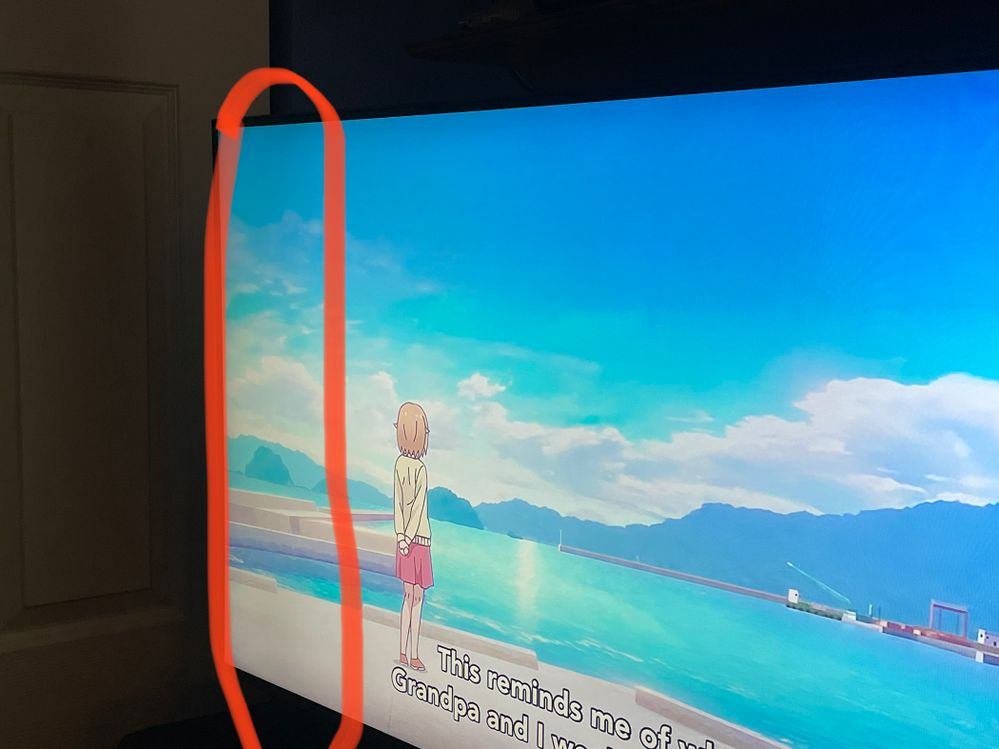 These shadows on the top and bottom are not part of the show. They do not appear when viewed on other devices. 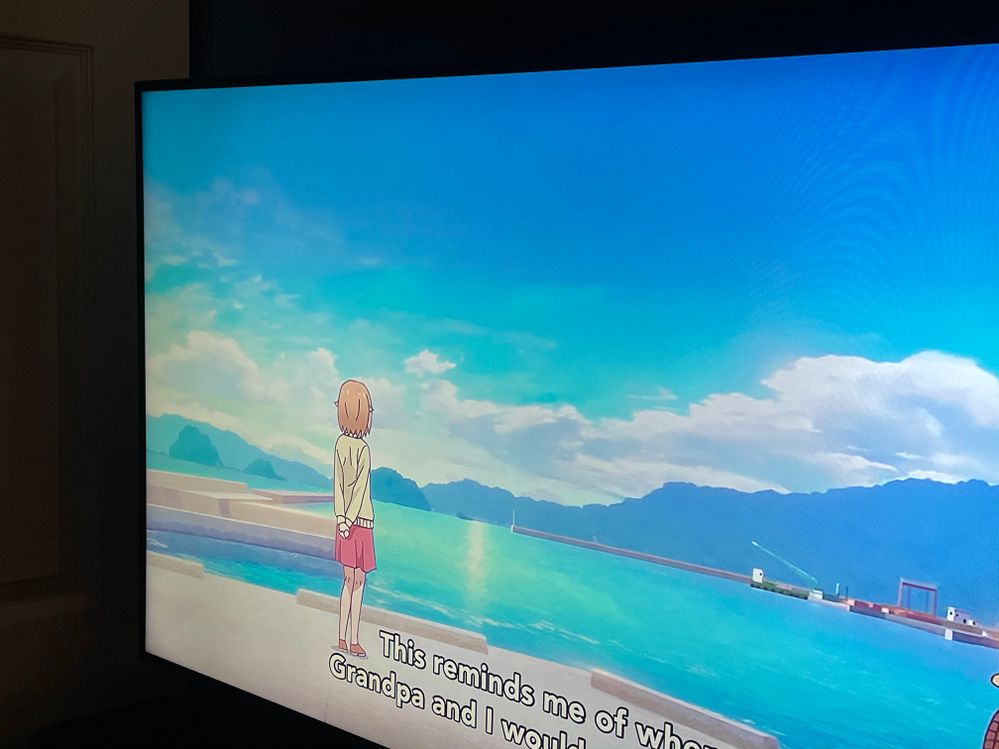 4k, 8k and Other TVs
Could you get the model number please? Could be a bunch of things. Also, since when did you begin to notice this issue? Right away or it just began?
0 Likes
Share
Reply

Sure! The model number is: UN43TU8000FXZA. I have only started noticing this issue within the past two weeks. I got the tv on Christmas, and I didn't notice this back then.

4k, 8k and Other TVs
On your model, in settings, are you able to adjust backlight brightness?
0 Likes
Share
Reply

I looked through my settings and unfortunately I didn't see any options for adjusting backlight brightness. Just standard screen brightness.