Dark vertical shadow near center of screen, running the full length of the panel top to bottom.  Just happened a few days ago while I was playing PS4 pro.  Have tried screen test, resetting to factory etc, issue unresolved.

Very disappointed in this TV, had it for just under 2 years.  Looks like this happens a lot on these, will never buy Samsung again.

I have the same problem on a Curved 65" UHD TV. Please help.

We are sorry to hear about this. Please send the serial number to this PM Link, and we will look in to this.

Same problem just happened with my QN75Q65FN. Very sad since it's an amazing TV and we bought it less than 2 years ago. A dark shadow about 6 inches wide runs vertically across the left side of the screen. Our older LED 55" and LED 46" models work just fine so what's going on with the quality of the newer tvs? Please help.

We had the same problem. Samsung supposedly gave us a one time warrenty for parts and labor and sent us to USSI for repair. USSI cancelled the ticket stating their service person was overbooked and couldn't take the ticket. Contacted Samsung back and they created a new ticket with the warranty still intact. USSI cancelled the service and stated that Samsung had cancelled the ticket. Went through this 4 times , all 4 cancelled. Then contacted Samsung and asked if I could get permission to go to a local service center and have them send Samsung the bill for the parts and Labor. I was informed that they could only use USSI for the repair, so that I was out of luck. 2 year old 55 inch TV to the garbage. Thanks much Samsung. I echo the prior post. Will never buy anything Samsung again. 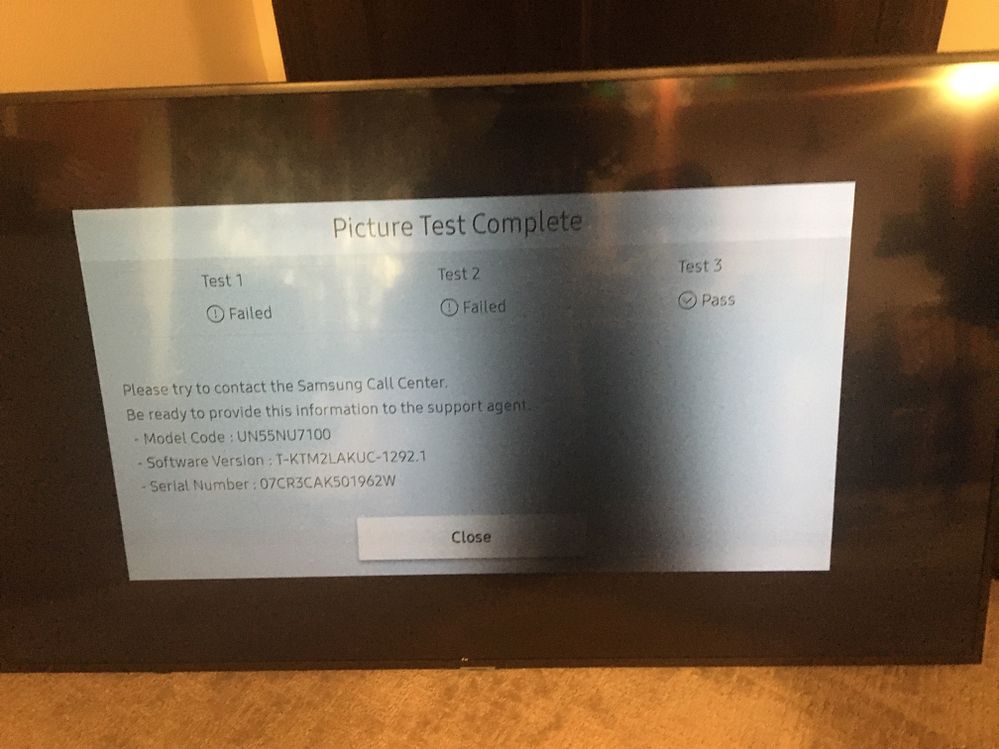 Hi, I am experiencing the same issue. Has a slight darker super light shadow. I too have tons of Samsung electronics, TV's, Washer, Dryer, refridgerator, etc, and I actually have 2 Samsung TV's that have a shadow or spot issue. This one is a 75" UN75MU6300, and my other is a 60" 7100 series. Very frustrating that Samsung knows about these issues, but doesn't do anything about it. Has anyone found a fix for these problems. I would definitely like to fix this one, since its a 75" and not have to go out and buy another one 😞 Especially with the things going on in the world right now. Another $1500-3000 is not what i want to spend on a TV. I have repair other TV's in the past as far as replacing the main board and a couple of other boards. So if that is the fix, which one is it? Thanks!

I had similar issue with my KS8000.  "Samsung supposedly gave us a one time warrenty for parts and labor"  Tickets created and cancelled twice.  Then Samsung told me they can't find anyone to service my TV and stopped replying to  my emails.

Yesterday a black vertical shadow appeared on the TV. It's slightly to the left of the Samsung logo and runs all the way from bottom to top. It's slightly darker at the bottom. I assume it's a burned out backlight bulb. The LEDs seem fine, it's just dimmer. (UN55KS800D)

It doesn't appear until the TV has been on for 10 minutes or so.

It seems like this is a common defect but Samsung will tell me I'm out of luck. I've had other Samsung TVs for over a decade so it's really upsetting that this one failed within 4 years. Can't see myself buying another Samsung unless I can figure something out.

Has anyone gotten this issue repaired?

Supposedly the screen layers are delaminating.  In my case, it's there all the time.  Your case may just be starting and gets worse after the TV heats up.

As I mentioned on other posts, I and many other were promised one time out of warantee repair, but then got cancelled.

I'm having the same issue. This is far from ideal and it is the second issue I have had with the TV. The first time round there was an insect inside the tv panel and it took Samsung a long time to engage with me.

This time around it's the backlight issue in exactly the same place as the other posters on this discussion item. I have called Samsung on the phone and there doesn't seem to be much engagement after that. The interesting thing is with a couple of power resets the issue will go away. I have been told a CAL data restore will rectify the issue but it will ALWAYS return when the set is powered down and back up. Which is a bit useless.

Samsung here I won't be purchasing another one of their sets.

Can anyone help or has anyone had something that was a bit more intermittent than permanent?Also reaching out to Samsung, any help would be greatly appreciated!