I'm sick of not being able to go to certain networks' websites like Viacom (MTV, VH1, BET), CBS (CW, CW Seed), or etc and not be able to log into my TV provider because the built-in browser Samsung has added to their Tizen based display products, doesn't support certain functions or features. 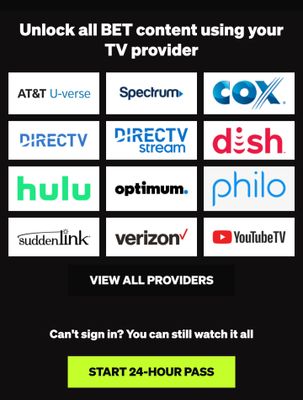 These networks, have provided two standalone methods (their app or their website) for accessing content outside of what's offered via your TV provider's VOD catalog and when it comes to Samsung TV's, if the app isn't on the platform, 9 times out of 10, the built-in browser isn't supported on the network's website either.

No, I DO NOT want to screen mirror my device especially if I'm binge watching an ENTIRE series. I don't think Samsung realizes that "screen mirroring" for one particular task like watching a movie or an entire television series, prevents you from using that device for more other important tasks. Samsung also doesn't realize, "screen mirroring" is also taxing on your device's battery.

And last but not least in regards to other suggested methods I've been told by Samsung... No, I DO NOT want to purchase a separate 3rd party streaming device to gain access to content that's available via an app or website when I've already spent thousands on your TVs!

Samsung loves screaming about how they have no control over developers putting their apps on the platform (which is true), but what you do have control over, is the ability to add a fully supported browser on your Tizen based display products, so your customers can access the content they're paying for via the developer's website. Which brings me to another point, you've rigged your TV platform up to fail in cases where a developer's app is indeed on your platform but is down due to a bug or maintenance and the developer has directed Samsung TV customers to their website in the meantime which isn't supported by your browser lol.

If you're that money hungry for a "carriage deal" from developers, others and myself, would gladly pay a one-time charge/fee to be able to download the full Samsung Internet browser from the app store to our TVs and Smart Monitors that'll fully replace the current browser that's preinstalled!