I have a UN55MU630D purchased about 3 years ago and the screen is slowly developing purple spots in multiple locations.  I've already spoken with support and the only option is to pay for repairs.  I would understand if I abused the TV, dropped it, or threw things at it, but this failure is coming from simply watching the TV and developed slowly over time.  There are 2 predominate purple spots with about 6 more just starting to appear.  Those extra ones are only noticable when viewing a mostly white screen, but from what I'm reading in the forums, they'll only get worse over time.

Paying several hundred dollars for a device that only lasts a few years is disappointing to say the least.  This is enough to not only think twice before buying another Samsung, but serve as a warning to others.

I do apologize for the inconvenience. Can you provide pictures of the symptoms you're experiencing?

Hi, I honestly didn't think I'd get a reply, but please see the attached.  Thank you for your assistance: 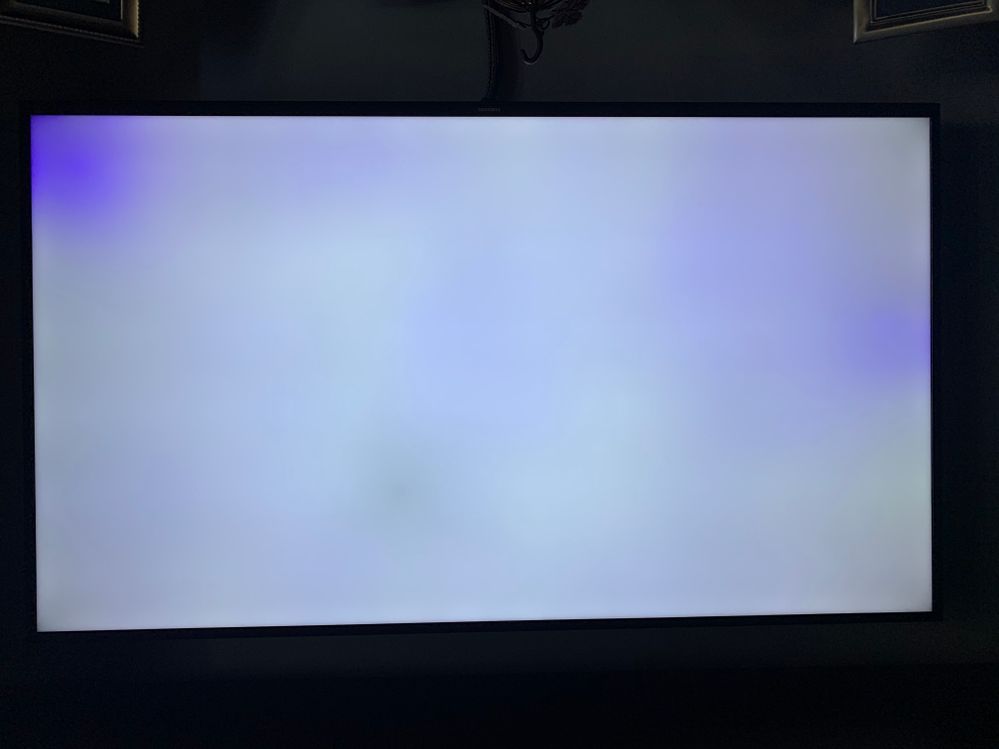 Does this happen on all sources, inputs, and the picture test?

Yes, this is on all sources (game console, satellite TV, and apps), all inputs, and during the picture test.  It's most noticable in videos with lighter backgrounds.  The picture I took was from the YouTube app showing a white screen.  It's least noticable in the picture test because the initial picture is a beach scene and the purple blends in with the pic.

There is a secondary issue, which started recently.  When trying something like mute the volume, I can't unmute it until I turn off the TV and turn it back on.  Changing the volume doesn't actually make the TV louder or quieter until, again, I restart the TV.  Downloaded apps disappear from Home, or the app tiles move to different locations.  I thought it may be an issue with the batteries in the remote, but it happens even after changing them.  I haven't figured out on how to replicate this, and it maybe happens once a week.

Since this occurs on all sources and during the picture test this will require service.

- If your unit was recently purchased, you can check with your retailer on their return/exchange processes.
- If you have an extended warranty you can reach out to them to have service set up.
- If you're within the one year warranty, you can Private message me or one of our moderators with your full model and serial number to have service setup
- If you're OUT of warranty, you can use this link below to find a service center in your area.

Please note my annoyance is not with support, I do appreciate the help and reaching out to me.  But this is what I typed in the first 2 sentences of my inital post.  It's a 3 year old TV (out of warranty) and I spoke with support already and they informed me I'd have to pay for repairs.

This, again, is why I'm disappointed in the product.  It's a 3 year old TV that now has multiple problems that I have to pay to fix and hope it doesn't break again.  I have a TV from another brand that's still going strong after 13 years.

So, this is why I will think twice about another Samsung TV and serve as a potential warning to others.

It's been not quite 6 months since my initial post, so I'm going to do a quick listing of all the issues I'm having with the TV:

- Purple spots haven't gotten too noticeably worse.  I read somewhere that the LEDs used for backlighting can be overdriven and turn purple, so I've turned down the "Backlight" level between 10 and 15 depending on what I'm watching.  I would prefer it to be a little brighter, but I'll live with it if it helps make the entire screen not turn purple.  The spots are a little darker, but on a colorful scene you can't tell (for now).

- Issue with the sound.  Every so often (with no real rhyme or reason) the volume control doesn't work.  I see the volume number scrolling, but it doesn't actually change the volume level.  If it's muted (which happens on it's own for no reason) I am unable to unmute it.  A "soft reset" (holding down the power button) has a chance of fixing this, but I usually have to do that 3 or 4 times and MAYBE it'll work.  Usually I just leave it at the volume level it's at if it's not too soft or loud.  Eventually the volume will decide to work, but I've learned to keep it at a volume level that is good for almost every situation (though I would like to turn it down at night as to not disturb people in the house).

- Issues with settings.  I also noticed when the problem with volume happens that I am unable to change any of the picture settings (backlighting, brightness, color, contrast, etc.).  Making changes don't seem to do anything and when I restart the TV all (or most) of the changes are lost.  App changes are also lost (more on those later), for example adding a new app or moving positions on the home screen.  The app will either disappear or move back to its original position.

- Issues with apps.  I have 0 KB memory available for applications.  A couple months ago I deleted all of my downloaded apps which freed up a couple MB of memory, and I thought it fixed the volume issue as that seemed to work for a while.  But now, with no apps installed other than the built-in apps, I am back down to 0 KB.  Any of the resets do not free up any space (Smart Hub reset or full reset in the support menu).  I was able to update the firmware to the latest version, but that didn't help either.   I am able to download apps to a USB drive, but the built in apps can't be updated.  I don't really use the internet browser on the TV, but I tried clearing the data there as well, but still has not freed up any space.  I guess the "workaround" is to install apps to the USB drive, but when I did have available memory, I didn't recall having the volume/settings issues I have now.

- So at this point, I have a TV that's slowly going purple, volume and picture settings may or may not work depending on how it feels at the moment, and I need to hope the built-in apps I use don't require an update because I won't be able to since there's no available memory.

Some of the things done:

- Smart hub reset (many, many times)

- Unplugging the TV (we actually had a blackout here a couple days ago, so in addition to unplugging, the power was out for a couple hours).

- Clearing out the browser cache.

It's a shame, because when the TV works, it looks good and performs well.