Yep same issue ; they won't even respond to your PMs on here either . Samsung really dropped the ball with this I've always been a fan of their products but $1000+ tv that lasts less than 5 years? What a joke

TV acquired in 2016, last night turned the TV on and shortly after sound remained fine, but the screen went to Vertical Colored Lines, my experience is just as described on this forum by so many others with this same TV.  Is Samsung still offering help with the cost of the LCD part to repair these sets?

We are sorry to hear about this. Please send the serial number, along with pictures of the screen symptoms, to this PM Link.

Update:  Samsung contacted me and extended my warranty to replace the LCD on my TV.  The repair has been made, and I am very pleased with the response I got from Samsung!

Purchased in August 2016.  Just last night, as we were watching the tv, it flickered and now only shows moving colored vertical lines on all inputs.  Tried to reset it, but nothing helps.  You can still hear the audio.

In 2016 we purchased 6 new Samsung products for our home.  Washer, dryer, refridgerator, double oven, over the oven microwave and this tv.  The dryer stopped working just before the warranty ended and Samsung fixed it.  Last year, the microwave started turning itself on and had a mind of it's own (Google it - it's a real thing!).  Samsung said it was out of warranty and we had to replace a very expensive microwave that was under 2 years old.  Now the tv!  So just over 3 years and 50% of the items have failed.  Very frustrating, since we have been so loyal to the brand.

Anything you can do for us on this tv?  It sure looks like it is an all too common issue on a very pricey (and up until yesterday) glitchy BUT GREAT tv.

Re: Model UN55KS8000FXZA TV Vertical Colored Lines on all inputs

same thing !!! Samsung should be responsible for their customers.Paying such huge amounts of money just to buy the defective engineering products.

Re: Model UN55KS8000FXZA TV Vertical Colored Lines on all inputs

Same thing here to.  I have the same model TV.

They said they have had no reported problems like this.

i see that this same problem has been reported to this Samsung Community page.

There must be a defect in this TV.

My 55" KS8000 TV set is barely three years old and  just started displaying colored vertical lines across all inputs. They move around and the sound works but it seems like something might have failed in the display panel.

This is very disappointing as the TV was pretty expensive. Is there any potential fix for this? Thanks! 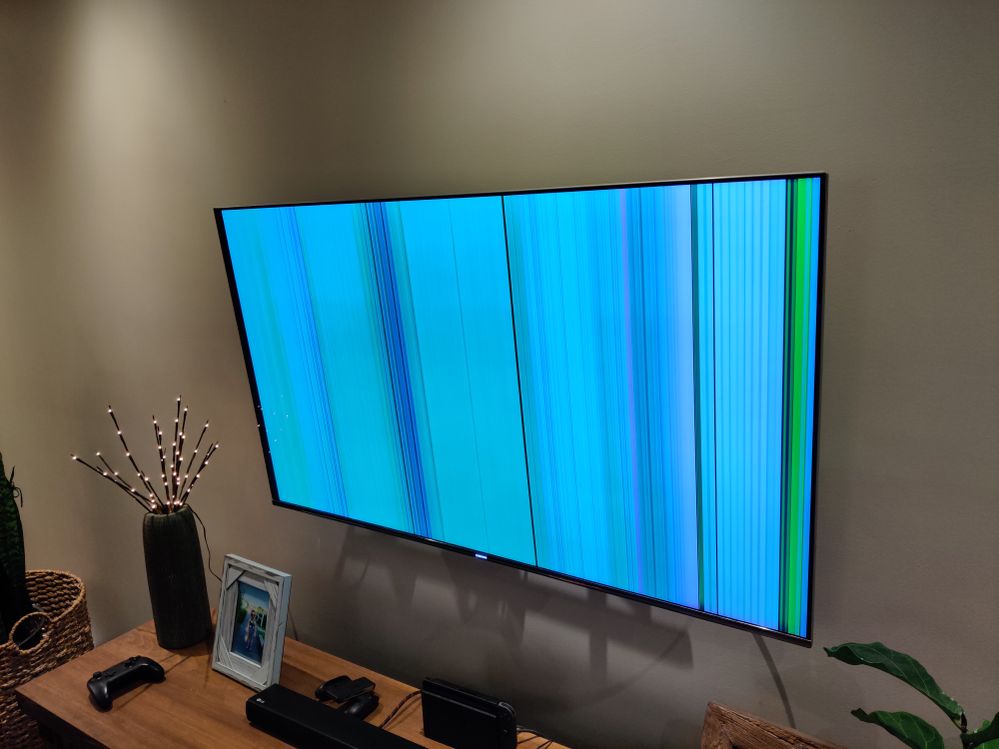 Vertical colored lines across my screen, all inputs.

Much like several other people on this board, I have a Samsung TV only a couple years old (about 3 for me) that has vertical colored lines bleeding from objects displayed on-screen. My TV is a 60-inch KS8000 and I paid a lot of money for it to have gone bad after only three years. According to what I read on similar threads on this site, I need to replace the LCD panel, which could run me the whole price of the TV since I am past warranty. I spent more on my TV than I've spent in one chunk for almost anything else I own, and I don't have a lot of money to spend right now. I am pretty angry and I don't think I will ever recommend a Samsung product to anyone ever again.

Besides all of the other ridiculous Samsung blunders, why the heck is my TV $2000 yet only has four HDMI, two USB, and literally no other inputs? Are you allergic to composite, component, and display port? And I can buy a TV for $300 and it will have more HDMI inputs than four. Why are there no controls on the TV in case the remote goes bad? Why the heck doesn't the TV respect my input renaming, just resetting it to whatever name it wants? Why is the One Connect box so cheap? And most of all, why do so many people have vertical line bleeds in their models after 1.5 to 3 years of use?

Samsung. I don't know how you do things in South Korea, but put some of that money you make into proper quality assurance. You are a joke, and you know you keep getting yourselves into trouble over this.

Re: Vertical colored lines across my screen, all inputs.

We are sorry that you are experiencing this. Can you send us a private message with your full model and serial number? http://bit.ly/33ipYnO