White circles on my TV screen

Several months ago, the TV started to develop little white circles or rings on the screen, which were aligned in a grid-like pattern. They weren't terribly hard to ignore since they only appeared when the screen got bright. However, over time the circles became more pronounced and have gotten to the point where they are downright intrusive to my viewing experience no matter the brightness of the screen. I looked this issue up and it seems to be related to the backlight. Is this a known fault with this model or with Samsung TVs in general? I spoke with technical support and they said that this is not a known issue and that they were unable to help. So am I just unlucky, or has anyone else experienced this with their Samsung TVs?

This TV brand new at the time of purchase and has been taken very good care of since I got it, so I don't think anything I did could have caused this issue to come about. This was the first Samsung TV I've purchased for myself and it may be the last. Which is unfortunate, because up until now it's been a good TV...

I'll include a pic of what I'm seeing in case anyone else has something similar going on. 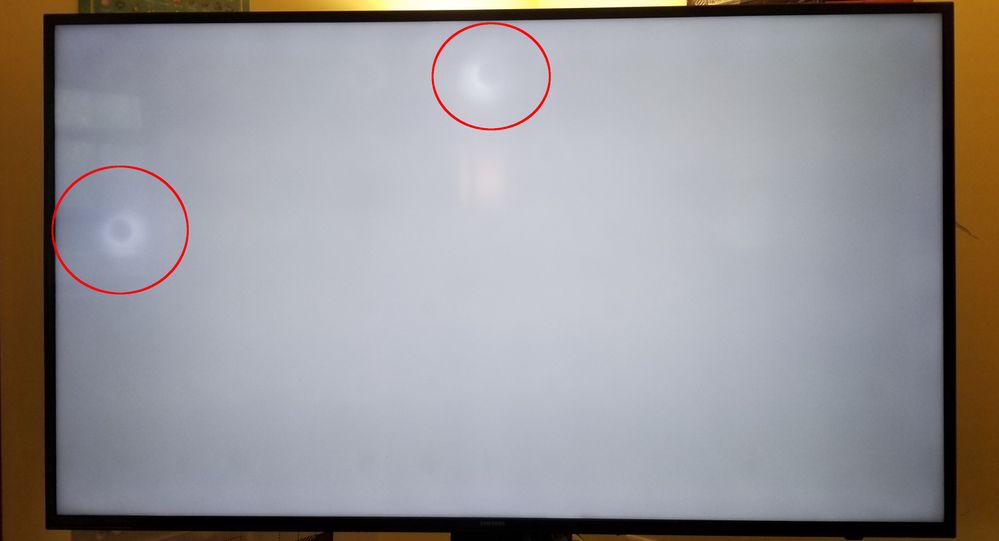 The two clearest circles. If you look closely, you can see many more dimmer circles arranged in a grid-like pattern.

I'm sorry to hear that, of this is occurring on all sources and during the picture test then this will require service, you have a couple of options based on your warranty.

- If your unit was recently purchased, you can check with your retailer on their return/exchange processes.
- If you have an extended warranty you can reach out to them to have service set up.
- If you're within the one year warranty, you can Private message me or one of our moderators with your full model and serial number to have service setup
- If you're OUT of warranty, you can use this link below to find a service center in your area.

Purchased Samsung in 2015 and in last few days white circles are appearing with on having a bright light. Is this known problem if so what action is being taken to correct the issue on exiting Samsung users ?

Is there a fix for the issue ? What is the repair costs if not covered by Samsung ?

Get the Hisense H9G.

This hs happening on my TV too. I have about 15 white circles now. I am positive Samsung knows about this problem. My TV was manufactured in Dec of 2016 so it is of course out of warranty. Does anyone know how to get Samsung to resolve this issue at no cost to me? It is obviously a defect and a lot of people are having this problem. All the appliances in my house are Samsung. I will be very disappointed if Samsung will not fix this issue. This TV should last for many years and is now failing.