Android 12
I recently updated to Android 12 OneUI 4.1 on my Galaxy A51. I was really hoping that it wouldn't be as bad as I imagined it to be, except it's worse than I could've ever imagined. let me explain why.
1. Elastic Overscroll. this new feature adds the effect of you pulling on your whole screen like taffy. Everything stretches and makes me nauseous. As if it wasn't bad already, once you scroll and the animation is playing, 1/3 of the time, you can't scroll back down as it ignores your swipe because the animation is still playing. Even worse, you cannot tap ANYTHING while the animation is playing. If I disable all animations, which removes the effect, all the other animations turn of as well. What makes me even more upset is that the old glow effect is still in Android 12! It's just used for older apps. So why not just add a toggle to change every overscroll animation that is elastic, back to the ole glow effect?
2. Material You. Where do I even begin? Congratulations! Your AMOLED screen is now pointless! I get lower shades of pastel colors while I am using dark mode on my phone, everything is spaced out more, and they need to add circles and curves to EVERYTHING! Notifications look so much worse and the font looks so small and they added curves to each individual notification. Material You screws up wigets like the device care widget and likely much much more. all of them HAVE to be curved now and can no longer be flush with my black wallpaper. Why? It's because it now has a stupid shaded color. They even added curves to PIP windows, which does nothing but remove content from the corners. It took over Google Play, which is now even worse if it wasn't already. You can't select any color you want. I thought this was meant to be for you, not Google.
2. Outlined icons. These replaced shaded icons, and they look terrible to me. Simple as that.
3. One UI is now designed for aesthetics and not usability. Reasons? That little grey notification bubble that appears on the bottom of the screen now shows the app icon. this can cut off text. it takes up more of the screen. Every menu now looks more bolded in settings and everything is so spaced out, that information that used to be all on one screen, now is spaced enough where you need to scroll, which may I remind you was made slower since you can't tap anything while the animation is belong played! in device care, you have this emoji on the top area of the screen whith these cheesy animations that are 'QuIrkY aNd ReLaTeAbLe'. Thanks for existing --->😀 for taking up have of my screen realistate. Want to turn off auto brightness? It will now be harder, because they made the button on the right of the brightness slider (which I think looks worse) smaller.
4. This OS isn't even finished. Some menus have black text on black backgrounds. they are invisible.
I will continue adding to this.
3 Likes
Share
Reply
21 Replies

Android 12
OneUI 3.1 dark widget on black wallpaper. I love how it tells you how much is used instead of how much is available.

Android 12
OneUI 4.1 Brightness slider. Right button is much harder to press and screams "Stock Android" compared to the One UI experience

Android 12
OneUI 4.1 display settings menu used as example. I hate the new non-shaded icons and the top font is bolded which looks worse to me and general layout feels off. Imagine having all letters but with boarders around it. harder to recognize, right? That's how I feel with these new icons. 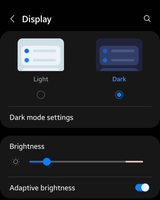