Hey is anyone else having issues where their 980 pro gets really slow sequential write speeds?

We had this thread: https://us.community.samsung.com/t5/Monitors-and-Memory/Samsung-SSD-980-PRO-extreme-slow-write-speed...

for this issue before the recent FW update (3B2QGXA7)... but I have the issue now with that update. 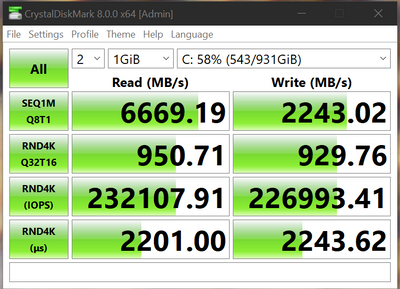 These are the typical stats I'm getting... note the oddly slow seq write speeds. When I first got the drive, I was getting writes in the 5000MB range.

I clicked the Optimize button in Windows to optimize the drive (via trim) ... no difference. According to Magician: SMART, temperature, health is all ok.

One odd thing is I have some large database files (90G, 62G, 76G, 115G) on the drive. If I take those files off and optimize again, it seems to get better for a little bit at least.

Is it possible there is a FW bug related to the caching and the existence of largely contiguous files? I ask since it kind of seems like it is dropping to a TLC-like speed

id uninstall Samsung magician and reinstall and get version 1B2QGXA7 driver mine works as advertised. I have not updated my driver  and don't plan to.