Samsung Update only shows option for Windows 8 and WIndows 8.1, despite my OS being Windows 10.

I want to update my drivers (and other stuff) using Samsung Update. I inputted my computer's model in the first box, but in the second box, I'm only allowed to select Windows 8 and Windows 8.1, but my OS is Windows 10, so I believe something critical will happen (such as downgrading; especially because I intend to update Graphics Driver, Chipset, etc). Do note that this is an old device (around 9 years old).

Basically.. Samsung Update doesn't allow me to get drivers from Windows 10 (which is my OS).

I'm very suspicious and try to be as careful when dealing with this kind of stuff. I don't wanna "lose" this notebook to something that is optional. 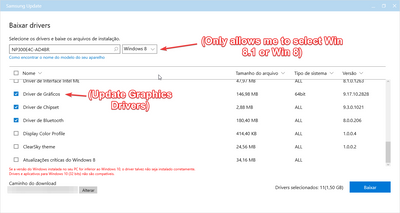 Is this an issue on my end or unintended..

Nevermind. This is an issue on my end. My model is not compatible with Samsung Update 🤡

No problem. I am glad that you figured it out.