So I am posting here because after research I do not see anyone with this issue and wanted to see if anyone had suggestions on what to do to attempt to fix it.

What will happen is my phone will lose internet connection while connected to my Wifi. As shown in the screen shots below it has the Wifi Symbol along with an exclamation mark. When I go to the Wifi settings it states "Internet may not be available"

The only way to fix the issue is to turn the wifi off then back on. Now keep in mind that this does not happen all the time as It will happen spoardically throughout the day and there does not seem to be a specific app that causes this. This has happened while browsing the internet on multiple different browsers and it has happened while watching videos in applications such as Youtube, Twitch, Netflix, Hulu, etc.... This issue only seems to be affecting my galaxy S8 as the other devices on my network does not have this issue including my old Samsung S7 Edge.

What I have tried is the following in no particular order

My Router is the Google Onhub

Galaxy S Phones
Glad you posted this. I will avoid updating to S9. How very disappointing the WiFi issue with Tues phones is 😐
0 Likes
Share
Reply

I found a work around FIX for the issue!

Ok so after 2 days of trying everything under the sun i figured out how to fix this temporarily until i get rid of this peace of junk samsung product.

after the last update from tmobile i would constantly get a message that my connection was bad to wifi.

thoughts: I dont know about other wifi access points / router but in Netgear Orbi there is no option to set different SSID for 2.4ghz and 5ghz badwith so in orbi they are always broadcasted with same ssid. 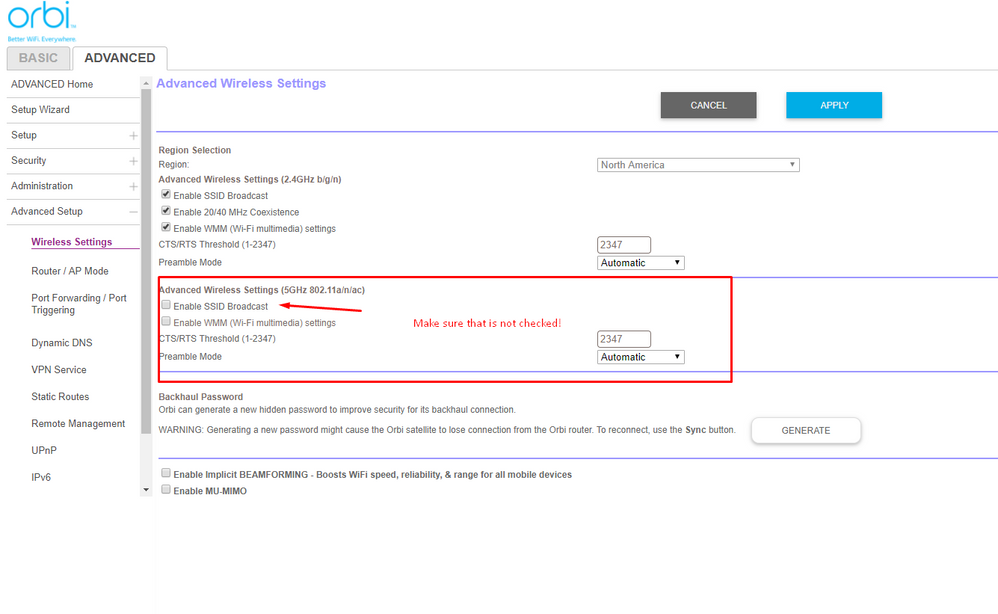 here is quick how to video on disabling 5ghz ssid

Galaxy S Phones
@userhuJV9mEpV4
Why would I want to turn off my SSID for 5ghz?
That is definitely not a fix for the phone.
Can you elaborate, thanks!
0 Likes
Share
Reply

Yes like i mentioned this is not a permanent fix just a work around until samsung issues a patch for the device.

Now why turn off 5ghz SSID?

I spend a few days now non stop testing every option to figure out what is causing this and i figured out that the samsung software which controls the device from switching to 2.4 to 5ghz has some flaw and when the device swaps it looses Internet access. I have no idea why this is happening as i am not a samsung tech.

but since i would much rather have a little slower wifi speed but have a stable connection i figured out that by turning off the ssid broadcasting my s8 would only connect to my 2.4ghz and not swap to 5 anymore.

this worked on my s8 and i just wanted to share with people a way to have a little slower but much more stable connection until samsung issues a fix.

Was your wifi issue w/ the Galaxy S8 / Galaxy S8+ Ever resolved?
What carrier do you have?
Has the Carrier asked you to do anything outside the standard troubleshooting?

Please Post your complaints on Twitter.
@SamsungSupport \ Be sure to use #GalaxyS8
*And Also tweet your local news station - they love the "FIve on Your Side" types of stories, and maybe we can get some traction.

From SAMSUNG Chat:
Ashwitha G at 15:25, Jul 15:
"Yes, I have checked the link you have provided but from our end there are no such reported issue. However, let us check with the troubleshooting steps and the issue still persists, you need to ship in the phone to our service center for repair."
"If the phone has been purchased from Samsung, then Samsung would definitely helped you but I see that you haven't purchased the phone from Samsung."

My Phone was 5 days old Purchased on 10JUL2017, and wifi started dropping the same day.
I have found a LOT of complaints on the web, and even an article in WallStreet Journal about it several months ago.
Samsung claims it is repaired w/ software.
This is obviously not true.

I called TMobile, they said that they can swap device because it is only 5 days old.
Store says $50 restocking fee. *Even if they refund the stocking fee, it is still crazy that so many people have to deal with this.
For some people $800 is an expensive purchase, and I want to stick up for those people too!
I paid Cash for my device in full, at a local TMobile store. Which TMobile says they are "franchised" and TMobile carrier can't do anything about re-stocking fees.
But If you search the Internet you can find a LOT of articles about TMobile influencing 3rd party restocking fees (for and against consumers).
We should not have to pay restocking fees for a defective item from the manufacturer.

Presently on my Router:
I have S7, S5, and a bunch of tablets - and a NEW router running AC 5ghz and 2.4 Ghz - NO devices in the house have wifi issues.

I have watched the wifi just drop on the phone.
The ICON shows an exclamation marks "!" icon next to the wifi icon.
Saying it is "still connected" but there is no internet.
And all my apps stop working, until I disconnect and re-connect.

I have Galaxy S5, S7, TabA, TV's, Speakers, and even appliances.
They should have known better than roll this out with issues.
They should have tested with numerous routers and wifi bands.
And our cell carriers should NOT be able to charge a restocking fee when they knowingly sell us a defective item.

Please help all the people who did NOT post on the forum, by actually tweeting!
"Samsung is already aware about the Wi-Fi issue, and told The Wall Street Journal that a second software update will fix it."

Definitely a Samsung's issue. I've tested with multiple devices and the issue is specifically for the 5Ghz band. Interestingly, my router supports A/C/N and if I set to 5Ghz to "A" only then disconnects disappear. However, I lose out on the true bandwidth of C/N.

This "work around" doesn't work at all.

Out of curiosity, what routers are you all experiencing this with. I saw mention of Orbi, which is what I have and experiencing the same problem. However, it doesnt seem as noticable when using my work wifi.

For reference, I only starting experiencing this with the early July OTA update (and subsequent one a few days ago) using the T-Mobile variant GS8.