So I have a Galaxy S6 Edge Plus that I am using currently and I noticed that my battery life has been not too stellar. When I checked what was eating at the battery I discovered Google Play services is the culprit. Has anyone else experienced this or has an answer for this? 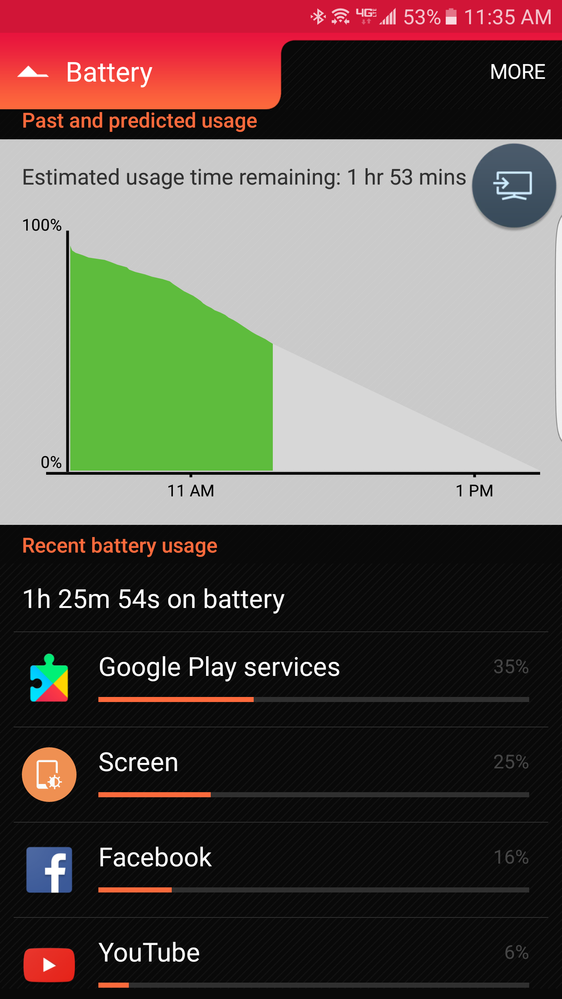 I rolled back my updates on Google Play Services and the issue went away. My new problem was dealing with the multiple icons that are constantly at the top of my screen telling me to either update or a given program won't work until I update it. 4 triangles with exclamation points. Can't figure out how to get them not to pop up. I had to reinstall the updates to Google Play Services just to get rid of them.

I haven't had problems with Gmail thankfully, but the Google Play store had to go.  Google maps complains on launch, but still works if you hit cancel.

I sucks that you have to do it, but it's better than a dead battery.

I have a Samsung Galaxy Note 8 with the same issue. Google Play Services are using to many resources and must be shut down. After 30 some hours on the phone back and forth with Samsung and Google and 5 trips to an authorized Samsung repair place, the issue is still not resolved. Samsung blamed Google. Google blamed Samsung. Yadda yadda. Samsung finally authorized a replacement phone but by the looks of all these posts, that's not going to solve the issue either. Maybe Samsung and Google need to work this out and take responsibility for bad technology!!!!!

In addition, my husband has the exact same phone bought at the exact same time (2 months old) and he is not experiencing this issue.....YET. We'll see.

Turning safe mode on seems to have fixed the issue. I guess that narrows it down to a third party app... Now what?

That's great news @userKq1F3cvrWX So from here you have 2 options: First, you can uninstall all applications from around the time you first noticed this problem starting. Second, you can back up for device, perform a factory reset and the reinstall your devices one by one while monitoring your battery's life to make sure you don't reinstall the specific app that drains again.

Hey @userKq1F3cvrWX I was checking in to see if you were able to get your device up and running.

Yes thanks for your help, the problem seems to be fixed now.

I have a Samsung S7 Active from AT&T that I ported to T-Mobile back in March. Starting about two months ago I ran into the same problem where suddenly the battery was discharing within about 4 hours and the phone was always quite warm to the touch. Prior to this the battery would normally last a full day, sometimes two if I used it lightly. I was at the point of tossing the phone in the garbage dump until I found this forum and this article that helped me track down the culprit https://www.maketecheasier.com/fix-google-play-services-battery-drain-android/.

I determined that Google Play Services was the source of the battery drain - it was accounting for ~26% of battery use when it should have been ~2%. I turned the service off and the battery recovered immediately. I turned it back on and the problem returned. I put the phone in Safe mode and the problem went away again, I booted it back to normal and the problem immediately returned. So I concluded it must be one or more apps that were causing Google Play Services to drain the battery, but which one(s) I couldn't tell. I turned off GPS location but that didn't help. They I read the suggestion to look for an account that might be causing Google Play Service to sync or otherwise run in the background. In my case it turned out that Microsoft had installed an Office account on my phone when I used Word to open an email attachment in Outlook from a colleague at work. I don't need Office on my phone so I deleted the account and viola, problem fixed! I don't know what the Office account was trying to do, but getting rid of it cured the battery drain problem.

BTW, Outlook is also a big drain on the battery, using 10-15% of the charge on my phone. I followed the suggestion in this article https://www.androidpit.com/battery-draining-apps to remove Outlook and instead use the native Samsung email app, which works great. This has also extended battery life a fair bit.

Hope this helps some other folks cure their battery drain problem.