I have the same problem. And because of it i will start off selling all my samsung products. I am tired of all this sniky snake like behavior from corporation and samsung has made the list. I dont even connect my samsung tv to the internet because my remotes microphone. Even if they are not listening, the fact they force you to disable and app instead of uninstalling is a dictatorship and should be illegal.

I feel the same. Since I discovered that Samsung had done a deal with the d-e-v-i-l in pre-installing Facebook on a Google operating system, and not allowing it to be removed, I have now decided to give Samsung an ultimatum.

I do not want Facebook on my phone. I find their acceptance of hate speech and their promotion of political lies to be bad for humanity, and I want it removed from my phone.

I fully expect that Facebook, because of the nature of their obvious agreement with Samsung, is still obtaining my personal details despite being disabled.

If the next Android update does not allow me to uninstall Facebook from my phone, and indeed any other 'app' I so choose, then I will switch my company mobile phones away from Samsung to another phone supplier which will allow me to choose the level of privacy I want.

You have been warned Samsung.

The clock is ticking. 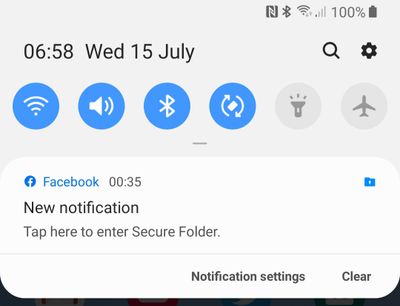 Needless to say, this is absolutely shocking where people on this forum are defending Samsung in not allowing the un-installation of the Facebook app.

It clearly is still running and Samsung must take steps to allow customers to remove this app.

I disabled facebook app. But these ones? I want them off this phone as well. I don't want any trace of facebook app on my phone. My solution will be to root my phone in the near future, which might lose me some functionality but will give me the power over what I have on the phone that is absent now. OnePlus doesn't do this nonsense. I wonder how many others don't? Give me control over my phone, please... I paid for it.

I went to Google Play store . Typed in facebook and uninstalled it through the play store .