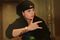 Re: S10 Blurry screen through messages

It's a network connectivity issue. Try turning on airplane mode for a minute and then turn off and try again.

Re: S10 Blurry screen through messages

I tried the reset as suggested. All it did was change things that worked and Iiked and then I had to reset.
My home screen became blurry after I performed an update to 52 Aps and after I downloaded Norton 360 w/ VPN.
The blurry home screen is annoying. My other screens were not affected.
Any other ideas on correcting this?
0 Likes
Share
Reply
Reply
Loading...
Related content