Not to be rude, but this is my conclusion based on what you wrote.

You cracked the screen on your brand new phone, and so immediatly bought an otterbox defender case to put it in so that you could illicit sympathy from the people here.

How do I come to that conclusion?  You wrote:

Typically I am not a fan of phone cases. They're clunky, annoying and in my opinion detract from the overall appearance and usability of the device.

As a person who had a note 2 in an otterbox, I feel the same way, this case doubled the thickness and weight of the phone, and I never even dropped it once, so I do not use cases any more other than minimal ones, such as the Silicone case that my note 20 ultra is currently in.

So to me, someone who hates cases, would NOT buy the biggest, bulkiest one before even powering on the phone.

Also, your picture of you phone shows a disregard for its safety, as what it is sitting on is far from level.  The crack itself, should not even hamper it's functionality as it does not go over any lenses, so not even sure why it is an issue, other than asthetics.

As for the 100's of posts about this happening, I have not seen 1, not for the Note20 Ultra, which uses a different glass than the S20 ultra uses.

You are bein g rude!!

Galaxy S20
Not samsung specific. You can find pages and pages of reports of camera glass cracking on virtually any phone. It's just a matter of how glass is produced. The tiniest of defects in the glass production process can later lead to spontaneous shatters. Just searched on the Apple Community forums and saw a 19 page thread of people with shattered glass on their iPhone 11 pros.
0 Likes
Share
Reply

Galaxy S20
Until there is actually video evidence of "tempered glass" breaking on its own without impact it will just be another unsolved mystery.
1 Like
Share
Reply

Galaxy S20
Ive never dropped mine my phone doesn't have a scratch on it.. put it on the couch for 1 sec and camera glass was cracked.. who replaces it? with out having to ship my phone of for a few days
0 Likes
Share
Reply

uBreakiFix is an authorized Samsung repair center.  They are a place where you drop off your phone, and then either wait in their lobby, or come back an hour or two later and pick up your repaired phone.  Two hours without your phone is WAAAY better than upwards of two weeks!

Cracked or shattered glass anywhere on your expensive device can be worrying.  I'm glad Samsung is addressing the issue.

Galaxy S20
They are addressing this with the note 20 Ultra?
0 Likes
Share
Reply

While my phone was charging overnight It broke. On my nightstand just totally broke. Unacceptable. I have been a loyal samsung customer for 10 years and will never buy another of their products. GLASS DOESNT BREAK LIKE THIS NATURALLY. THIS IS A SERIOUS QUALITY ISSUE.  LET ME BE VERY CLEAR THIS WAS NOT IMPACT DAMAGE AS I HAVE NOT DROPPED MY PHONE. This image matches a lot of other images of people with broken s20 phone either way with as many reports as there are Samsung should do something about this they have lost a customer. I never had any issues with my S7 but I had numerous issues with my S10 and this was the final straw with my s20. Just purchased two new iPhone 12 pro Max. I'd rather pay double then throw anymore money into this sinking ship. 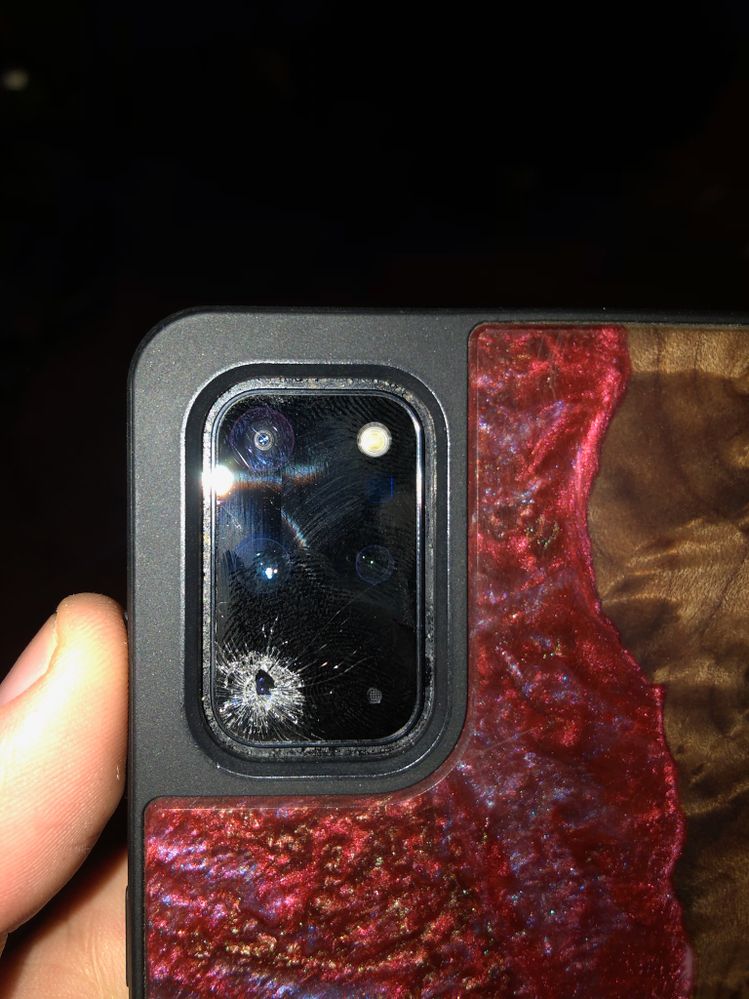 Galaxy S20
sorry to say but that is impact damage. its obvious something hit it and chipped it
0 Likes
Share
Reply