Galaxy S20
I got my S20 Ultra on release day and soon after put it in a LifeProof case. I always carry it in my front pocket and have had no issues... until this evening. I pulled it out of my pocket to use the flashlight and it was fine. I put it back in my pocket. a little while later I pulled it out to play a game and noticed the bullet hole type shatter like others have mentioned. it seems that the repair should be as simple as prying the existing remaining glass out of the back of the phone and inserting a new piece of glass over the camera lenses. sounds like the $100 - $400 repair price I've seen mentioned is extremely high for the amount of work that needs done.
1 Like
Share
Reply

Galaxy S20
Dear Mr. Gantt: your a DA! Your own text basically says you're a crook. It cracked but you don't know when. It could have been the morning of the 14 day of your return policy. But you don't know because you were apparently crying to loud. I am glad you were pacified. Most democRATS cries like you do. Your post was informative. Because it states the obvious truth about the mind set on how to take what you did not earn. I'm sure your work ethic might fall into the same mindset. And if you worked for TRUMP he would say YOU'RE FIRED!
0 Likes
Share
Reply

Galaxy S20
Samsung will not fix it.??!? This is wrong and a major issue with this phone. They had no problem taking my 1400 for the phone. I noticed right after I got the phone the screen had a hairline crack, it being such a big purchase of course I was extremely careful! This had to have been a defect out of the box and you just couldn't tell without closely looking.
I hate to replace it thru the warranty because you get a refurbished phone, when the inly thing that's wrong is the camera screen. I have been a faithful Samsung user for over 10 yrs... Sadly, I will never buy another Samsung, Ever!
0 Likes
Share
Reply

This is still a problem. I recently had it happen to my S20 Ultra as well. I simply turned my phone over on the table after using it and found what looks like a bullet hole over the wide angle lens. It has spiderwebbed out over the entire lens now.  I started an insurance claim through Asurion and they want a $250 deductible to replace the entire phone. I noticed many others online having the same issue so I called Samsung.

Customer service said that Samsung has not acknowledged a problem at this point. My option was to send my phone in under a warranty issue and I would have to pay for the fix. (unknown amount until they receive it). I called UBREAKIFIX and they said they could fix for $100.

I have had many Samsung phones over the years and this phone is the only one I have had issue's with.

First the camera would not focus on closeup images, and now this.

I would NOT recommend this phone to anyone. I regret upgrading from my Note 8. Perhaps i switch brands going forward. We will see how Samsung responds. 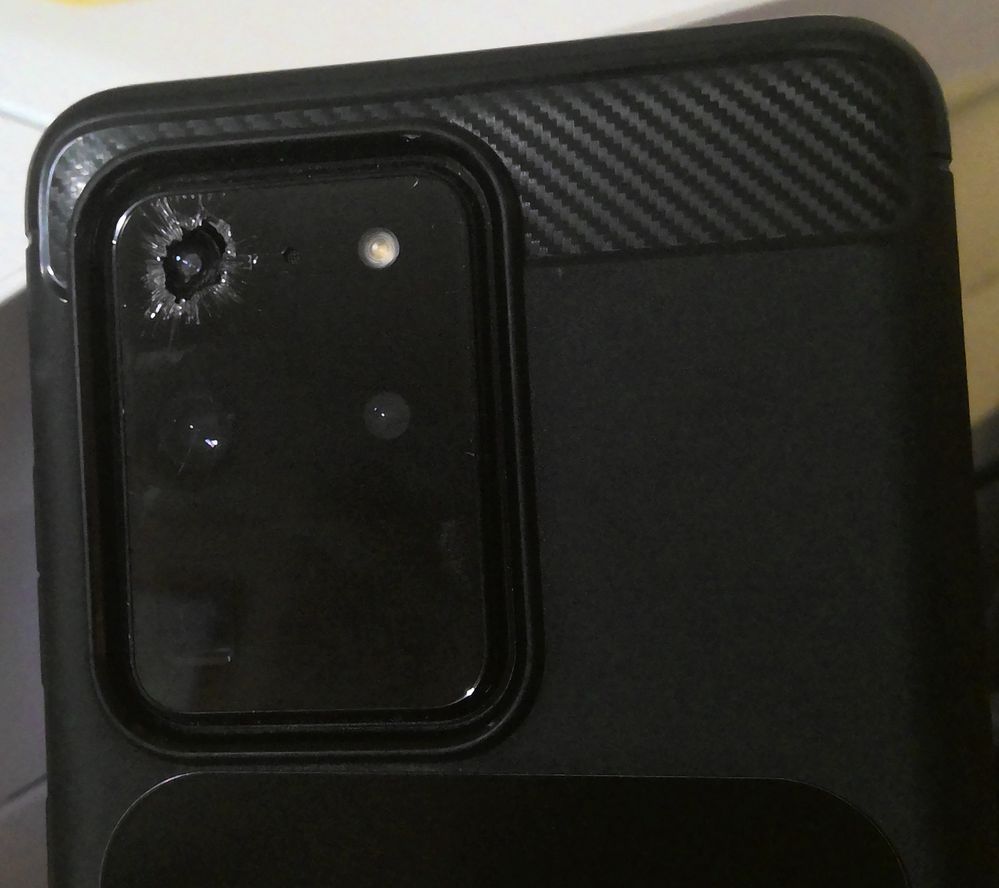 We did not drop or mishandled these phones. When i decided to clean the my phone. I noticed the back glass was cracked up. My wife checked her phone and seen A minor crack or scratch in her camera lens. I report this to T-mobile and they told me they noted it and will get back with me since its been under 2 weeks of having the phones dec. 6, 2021. Comes Feb. 14, 2021 my wife phone was working as normal listening to music and put the phone on the kitchen counter while cooking. When she went back to her phone to check a notification while we are having a conversation the screen did not come on nor worked black screen. Everything else is still working alarms reset just the screen does not work. Went to t-mobile they would not fix it and said used the insurance. Called samsung went to ubreakufix and wanted to charge me. Its at the samsung center now and they are trying to say we dropped the phone and thats why the screen isn't working saying the camera lens is cracked. They want me to pay to fix a phone i reported having an issue with the camera lens. But from dec. To feb that caused my wife screen to go black yea no longer buying samsung.

Sorry for the grammer.

Galaxy S20
My s20 ultra camera glass is broken without anything today. I am looking for the service center.
0 Likes
Share
Reply

HI, My rear camera has cracked aswell. how do i have this repaired?

Galaxy S20
Same exact issue with my S20 and in protective case never dropped ! I have all blurry pictures too!
0 Likes
Share
Reply

I've found that my S20FE camera glass has cracked out the blue. It hasn't had any trauma or been dropped I've seen online and in a different chat on here a few of the S20 collections have had this issue, been in contact with Samsung who have told me it's not a known issue but if its not a known issue why have a lot people spoken up about it?

After research I see there's currently a legal battle going on about the back camera glass cracking easily without trauma.

I have the wireless charger for the phone/watch/earbuds combo could it of cracked due to overheating?