Galaxy Watch
I've had the Galaxy Watch Active since early December and after about a month it started being uncomfortable on my wrist. I thought I was just wearing it too tight but loosening it didn't help.  I stopped wearing it for a while and then wore it for the last 3 days. I noticed today it was very uncomfortable again and that I have a rash in 2 spots on my wrist. The rash looks very much like how I react to latex after continuous exposure.
I am allergic to latex, does the band that comes stock with the watch contain latex?
2 Likes
Share
Reply
6 Replies

I am sorry to hear about the rash! I will be happy to look into this further for you. Please send a private message with the model code and the serial number or the IMEI number of the watch, and any photos of the rash you may have. http://bit.ly/2XERsky

Good morning! I just wanted to check in to see if you are still in need of assistance?

Galaxy Watch
Sorry, kept forgetting about it. I will message you

I have the same issue. I'm latex sensitive/allergic after years of working in the healthcare industry and wearing latex gloves. When I wear my watch, after about 10 minutes I need to take it off as I start to get itchy under the band.

Samsung need to change the materials they have used to make their bands. There is clearly latex in it which they don't want to admit to. The fact they keep asking people to private message them is disgusting as this issue has been noted on this forum since around 2019 if not even earlier than that. I discovered that when searching for info on the issue.

When you pay almost $400 for a watch, you would expect it wouldn't do this as they are meant to be silicone and should be medical grade. Why is there no product info on it? Because they probably used fillers in it and it isn't as good as it should be. More than likely to cut their costs which boosts their profit margins.

Think I will be ditching my watch and going back to a normal full metal watch as I never had an issue with wearing a watch before this. Plus I don't need anymore scars left on my arms from this product. The blistered areas have left permanent scars. 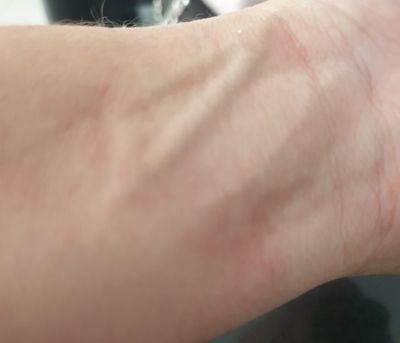 30 mins of wearing the watch on left arm. Swapped arms and the below happened to my right wrist. 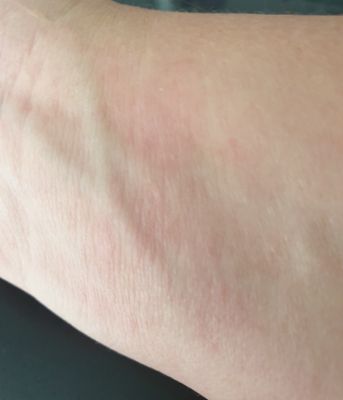 This is after 10 minutes of wearing the watch.

Thank you for reaching out. I would be happy to assist you further. Can I please have the following information in a private message: http://bit.ly/2JH2rq2

Did you still need help with this issue?