@userOlIVvWslY5 Please send us a private message if you would like for us to look into this for you: Link

I cannot remove my ice bucket either.   I have force defrosted this thing 6 times!  Also used a hair dryer and it still wont come out!  It moves just a smidge but that's it.  I pull with everything I have and it won't budge any more.   Im afraid of breaking something too.  I don't know how this thing won't come out after 6 force defrosts!  I can't shut down the whole fridge because I have no place else to put my food.  I am extremely frustrated!  Model number RF28HFEDBSR.

You need to put the ice maker into a forced defrost mode.  Put a towel under the ice tray before you do this.  It shouldn't defrost your freezer or warm up your fridge.  You may have to do this a few times depending on how much buildup there is.  Here's a Youtube link

Unfortunately there's no fix for Samsung's ice maker problems.  They'll try to get you to pay to "fix" it but I've been dealing with this ice maker problem for a couple of years now and everything I've read and seen indicates the problem will keep coming back.  I'm at the point where I've just turned off the water line to my fridge because even turning off the ice maker didn't prevent frost build up on the ice making mechanism. 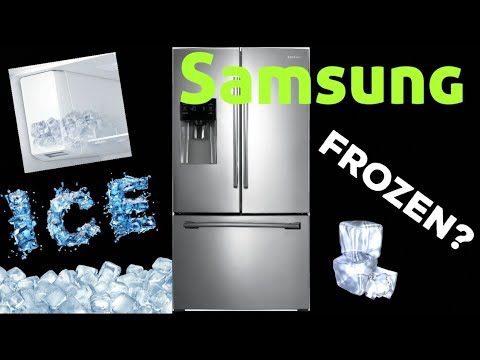 Samsung Fridge Ice Machine Freezing up. Easy FIX (MY ICE TRAY IS FULL AGAIN)
youtube.com/watch?v=VcENbiRNgac
FD mode will defrost the ice machine in 20 minutes. The beeping will last 20 minutes. You do not need to empty your freezer. If your ice machine is frozen yo...
0 Likes
Share
Reply
Reply
Loading...

It will start to defrost your fridge and freezer.  Mine did.

The manual is pointless if the ice bucket is frozen shut. I'm having the same issue and it won't come out more than 1/2 inch. I tried the blow-dryer but there isn't anywhere you can do that if it doesn't open except through the ice dispenser. So please tell me how to remove a frozen shut ice bin. Your manaul doesn't inform us what to do in case the ice bin won't come out!!!

Mine won't come out either.  It moved a smidge and I can't get it to move anymore.  Now I can't even push it all the way back in.  It will only go in so far.  So now there is a little space because I can't get the tray back I  over that lip.

We have the same problem.  Looking at the ice bucket, there appears to be a thin plastic plate between the top of the bucket and the refrigerator itself, preventing the bucket from moving up when lifted according to instructions.
Could this possibly be a shipping brace of some sort?

I am having the same problem with my Samsung RF28hmelbsr/aa which doesn’t even show up on the Samsung website when you search the model number. This is is no fun and I can’t move myself to unplug now I not only have to have all my food spoil I have to pay a hefty fee for a handyman to move it for me. Second time in the 2 years since it’s been installed that I have had to have a repair person for the ice maker.

I have the very same problem.  Ice wouldn't dispense.  I had to replace the ice maker when it was only 1 year old.  So I thought it is probably dead again, but would try resetting it first.  Went to remove the ice bucket and it won't budge.  Took a hair dryer to it for 30 minutes.  Still won't budge.  Pulled so hard that I broke one of the tabs holding the slick front face on it.  This is infuriating!

And I work for a company that was recently purchased by Samsung (different division), but I have no idea how to actually get someone's attention about this.  I love everything about my Samsung french door fridge EXCEPT the ice maker (even when it is working, it dispenses slowly and doesn't make much ice--not enough for Texas in the summer, at least).

@userxYbX4DB0Yc: Could you send a private message with the full model and serial number?