My auto release function is not working. It is turned on but is not opening  at end cycle.

This was a very frustrating issue. I tried all of the suggested solutions. The only solution that worked was the easiest and cheapest. Spray some white lithium grease on the release latch. It has auto opened ever since.

Just want to confirm that spraying white lithium grease has worked for me as well for at least two loads now (hasn't worked for months before). I am not sure whether it only has to be sprayed ont he latch -- I sprayed some on the latch and the two gray small pieces that look like they are there to "push" the door. Spraying just on the latch did not work at first. Thank you for the suggestion!

Anyway, give this a try if you are having this problem!

My DW80K5050US/AA AutoRelease tabs are stuck. I ran the dishwasher as normal, the door popped open as normal, and the AutoRelase tabs never retracted. Does anyone have a solution? Not looking to call service. Sorry, Samsung.

So my tech arrived yesterday to look at my dishwasher. He knew immediately what the problem was, and already had the part (part number DD97-00256A) with him. He said he has replaced "a lot" of these door openers. He thinks the one he installed is an upgraded version Samsung has put out to try to fix the problem, but to me the new one looked exactly the same as the old one. Here's a picture of the one he took out. 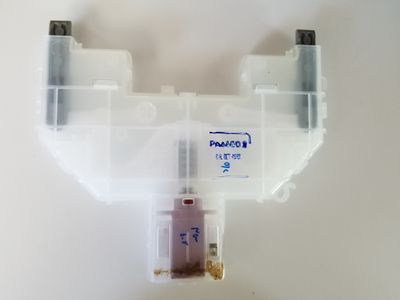 Failed partIt's pretty simple. A tiny 120 volt  solenoid (at the bottom of the picture) pulls back against a strong spring (in the middle, just above the solenoid), actuating some plastic arms that push out the two grey pieces (at the top). Those two grey pieces push out through two small slots at the top front of the dishwasher and physically shove the door open.

I ran a test wash right after he finished installing it, and can report that the problem is in fact fixed. I'll report back again in a few weeks on how the repaired part continues to work. Thanks to Samsung for getting the tech here reasonably quickly, and solving the problem with a minimum of red tape.

My tech, incidentally, was a very nice, personable young man who knew what he was doing and quickly had things fixed.

Thanks for the detail.  Did he have to pull the dishwasher to install this, or could he do it without that?  My dishwasher would be a pain if they have to remove it because of its location.

An update: It's failed again. I've run the dishwasher four times now, it worked ONCE, the very first time. Since then it's never worked again.

This is so very obviously a design problem. I'm not going to bother attempting another repair where the repair guy comes out, replaces a part that was designed faulty with another identical part that still doesn't work.

This is SO FRUSTRATING, especially on what is supposedly a "high end" dishwasher!

Posted in another reply but I'll post here for your visibility.

Hi, just to give everyone another possible solution on this issue. I've experienced it myself and I determined it was the the screws that were installed by our contractor that go into the cabinet boxes on either side. Tightened them and worked perfectly again after that. Also, make sure your settings are correct too.

This was my problem as well.  A screw was preventing the door from popping open.

I have found a bit of lubrication seems to help. Tool in a can etc. (just a little)