I purchased this range in November. I read a report or two about how easily it turns on. The huge knobs are great. But, let me set the stage for how I know a bad design job from a great one. My father was part of a 2 man team who, in the 1950's, designed the 'Spin Free' knob at Patten Button Co in Knoxville, TN. They manufactured all sorts of plastic products and, yes, buttons, too. Their knob was the brain child of a co-worker who was playing with poker chips and put one atop the other and tried to rotate the top one. The little groves kept him from doing it. He took the idea to my Dad who designed the machine to make injection molds for their Spin Free knob.

This simple knob kept kids from turning on a stove. They could spin the knob and nothing happened until Mom pushed in with a little force and turned it to the desired setting.

My new Samsung is a flat glass surface. It's easily scratched so I purchased a black 'drying mat' just in case casseroles were placed on it in preperation of using the oven. I wanted to keep the surface new looking for as I could.

Imagine my surprise when last week my teen granddaughter yelled something was on fire.
She had put together some Christmas treats. None required the use of the surface range. But, sure enough, the left rear burner was bright red. The black pad had melted and stuck to the stove. I was sick. All that  money and all that care and here was this mess.

I tried to recreate what happened and how it happened and it was very simple. I bumped the knobs on the left with my mid section and slid my body ever so slightly to the right. Sure as the sun rises tomorrow, that left back burner became flaming red. It was on 'high'.

These are the poorest designed knobs I have ever seen. The concept is good but the force needed to activate them is woefully lacking.

I was able to let the remnants of the black drying mat cool and used a single edge razor blade to gently lift off the black gunk stuck to it.

Shame on Samsung for not checking the this out since there have been prior valid complaints. 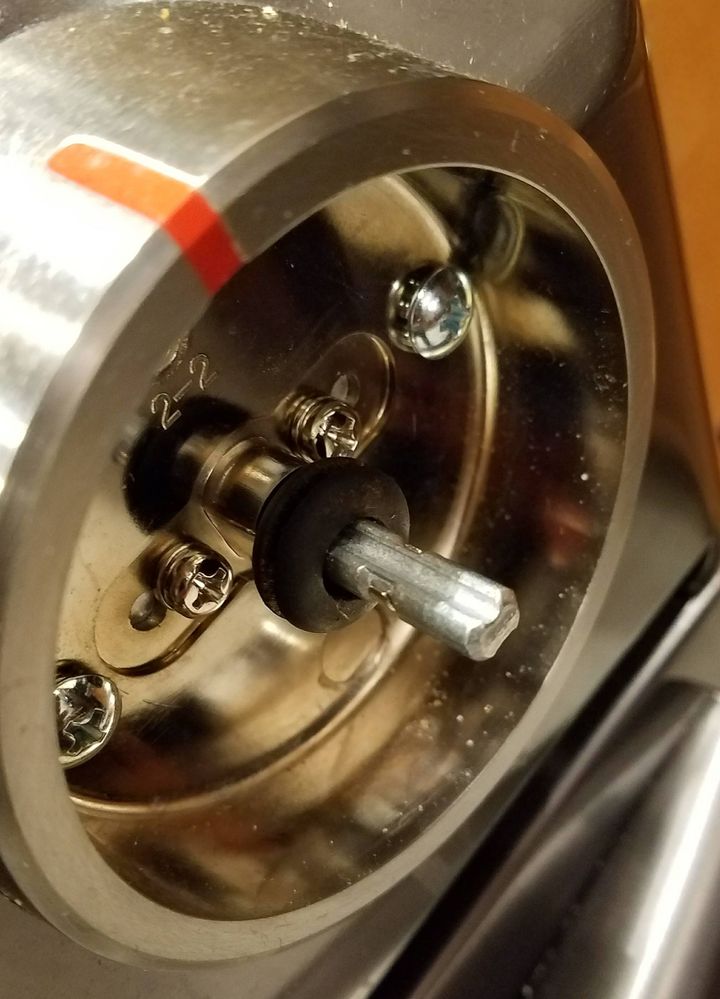 There's a man who posted this solution a couple of days ago - WORKS GREAT!  Go to Home Depot and get 9/32 inch neoprene grommets - remove your oven knob and place as shown in picture.  Then put the knobs back on. It will require extra effort to push and turn the knobs BUT you won't accidentally turn on the burners!

We have had many issues with this - Samsung came out and said there is "nothing they can do because the oven is performing to specifications."  This is an awful design.  It is happening with the induction ovens and the gas ovens.

See if you can reference his post above.  Hope this helps - it has certainly solved the problem for now - until they resdesign.

This has happened to me too... several times.  What is a recourse? I want to sell it and buy something else, but would feel bad selling someone else this fire hazard!!! I am beside myself. Have you gotten any help with this issue?

Would you please tell me where this safety feature is. I think I responded yesterday and said I know where the small 'lock' icon is at the bottom of the touch screen. I used that feature but it did nothing. I was still able to activate the surface range knobs. In fact, I could also open the oven door. Nothing appeared to be locked. If I used the wrong icon, and there is another, please tell me where to locate it on the touch pad.

Hmm, looked into it further and the control lockout only appears to affect touch controls, not knobs. =/
2 Likes
Share
Reply
Reply
Loading...
Highlighted

I just went through the whole process again using the little lock symbol on my touch screen. It appears it only activates the oven latch. Because I could still easily push and turn on the eyes. This is really frightening. If I had known all this, I'd have never bought this dangerous stove. Too much time has passed for me to return it (November). I have tried to come up with a do-it-yourself something to remedy this. Taking the knobs off and putting them on as needed seems impossible. I couldn't remove them (but I didn't use a lot of force, either). I understand the bad thing about Samsung is the lack of a warranty? Is that correct? Without going through my papers, I thought I bought something extra when I bought the stove. However, that's the company's way out. It isn't 'broken'. It's merely dangerous and  oh well too bad for the consumer.

Samsung has a 1 year warranty parts and labor, but since this isn't considered a defect I don't think it'd be covered.

The knobs are removable. They should pull straight off. I can double-check if you give your model number to make absolute sure, but every model I've seen the knobs were removable.

On newer models, they actually added a very highly visible way to tell if a knob is turned on...but there's still no way to lock them. And as far as I know, the oven door only locks when it's in a cleaning mode.

You are probably correct. And thought I don't mean to sound angry at you, I have a brand new shiny stove sitting here with the knobs off because I'm going to wake up (or maybe not) with the house on fire? Is that any way to live? A brand new Samsung stove and a design flaw so bad if I leave home I'm wondering if I hit those knobs before I left. Shame on Samsung.

Would you happen to have a transaction number that we could look into?

I bought this oven at Lowe’s. It is so annoying because every time I use it the buttons and knobs get turned on for all different functions, constantly! I’m shortand End up leaning on the front all the time.

This range is worthless now because I can’t use it without absolute frustration.

Its extremely dangerous! I’ve had cutting boards melt and other items melt due to the Knobs turning on so easlily.

The last straw is when my Christmas supper was ruined. I had a glass dish of cornbread cooking on the top and someone leaned into the knobs turning a burner on high. It burned the corn bread. My son and husband were trying to figure out what was burning and noticed the burner on. My husband tried to move the glass dish and it exploded all over the kitchen and dining room and glass went all over the other food near the oven.

Ive owned a Samsung washer that had to have a fix due to exploding lids.

Im done with Samsung and I’ll make sure everyone I know realizes how dangerous this range is!

There is is no way to prevent this problem as far as I can tell. I only found the lock for the oven door.