Having the same problem with Samsung ice maker  freezing up not making ice.  I have to use the blow dryer to thaw it out weekly. It's been replaced by company I purchased it from, but the new ice maker they installed does the same thing. It's a default in factory refrigerator. All of them should have been recalled by Samsung. Samsung is coming out tomorrow to fix it again. We should all demand a replacement refrig.

I fixed my ice maker by doing this. 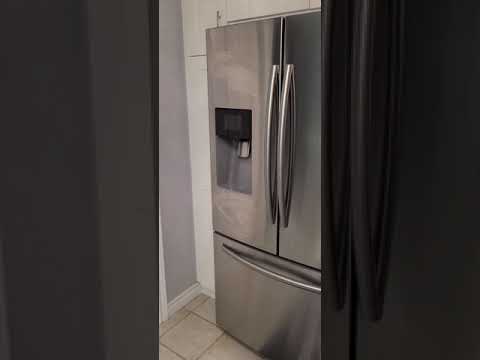 Ice maker in our fancy refriderator has never been as cool as the rest of the unit. It worked originally for about 6 months. Then every three months or so for the next year the ice would bind up and not fall properly. Then over the past 4 months, the ice maker is frozen solid around the fan area. Called out a technicial ($75) to STEAM it free. He mentions "Hey, see if there is a class action lawsuit out yet, I have been stemaing these for a while now." That lasted about 45 days trouble free. Now I am resorting back to freeing up the jam manually and awaiting the thing to freeze up enough to require a steam service. Go figure. Please help!

The ice maker on our FR25 Refrigrrator keeps freezing up. Defrosting doesn't seem to solve the problem. Looking for solutions.

My Samsung refrigerator is freezing up several times a year.   I have to defrost and now it seems to be getting worse.  I see all over the internet thousands with this problem.  Who do I contact about the situation to be resolved??

Hello, How do I go about getting my Icemaker repair under the service bulletin 2017.05.24, I understand this is an issue and I've been having a problem for over 12 months.

We bought our Samsung refrigerator RF23HCEDBSR/AA  in April 2016. Sometime in  2017 the ice maker began freezing up. We called Downtown Appliance (Columbia, Mo) and initially they stated it was past warranty. After talking to them again, they returned and claimed it was fixed. A few months later the ice bucket began cracking and the ice maker began freezing up on a regular basis and once the cooling coils in the back of the fridge froze solid. In 2020 the cooling coilI contacted our warranty company and in Aug 2020, they fixed the issues, which lasted until October, when it the freezing up began again. In addition to freezing up, water began leaking from the ice dispenser and when not frozen up, the ice was slushy.  In December 2020, I contact them again, and they sent someone out. On 18 Jan 21, they came out and replaced the ice maker. This afternoon (19 Jan 21), the ice is slushy once again. We spent close to $3,000 on this refrigerator and feel like we wasted our money. We shouldn't have to deal with ice maker issues at least twice a week.

I am sorry to hear about this. Please send the serial number to this PM Link, and I will look in to this.

I also have a 2016 refrigerator with the same issue which started last year.  I was going to buy a new ice maker but after reading about all the issues I'm not sure that's a fix.   Is Samsung offering a solution to this problem?   I have the same refrigerator from 2009 and have never had a problem.   That's why I bought another one. Seems like something's changed for the worst.

@userA9AK43AYJp   I am sorry to hear about this. Please send the full model and serial numbers to this PM Link.