I have a powerbot 9350 that I sent for support on August 2019 that was not charging. The powerbot was supposedly repaired where Samsung sent back to me fully charged but still the robot vacumm was not charging using my dockstation (which was also sent to support back then).

As I don't live in the USA, I could not send it back to repair and end up buying a new docking station part as advised by Samsung which should solve my problem. I got my new station today which is apparently working and the red plug light in on (my old docking station the lights was never on) but even tho the powerbot is still not charging.

The emergency switch is turned on, red light shows into the docking station  but even after pressing the on/play button in the powerbot it does not turns on or charges. I'm not sure if the battery is. at 0% and therefore not charging or if could be something else - back when it was sent to the repair, Samsung said that they had changed the battery of my bot.

Is there anything I could try to do ? 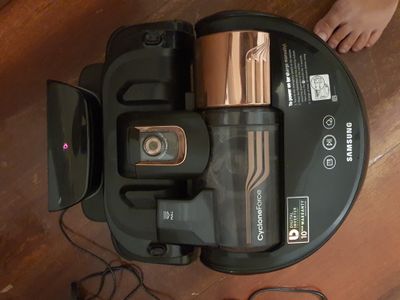 Re: Powerbot 9350 Not Charging

If you find this issue, check if the unit has power. If you find the emergency switch is turned off, then switch it on. Do not forget to check the battery indicator as well. If the indicator shows in full charge, the unit will not charge any further.