ice build up over fan and evaporator coil

It has been 8 yrs since I purchased my refrigerator and started having issues with ice build up and freezing around the evaporator coil. I am surprised to see so many people reporting it and it is a common issue with Samsung refrigerators. I tried requesting for repair but everyone says there is no permanent solution of this. And every time this happens I need to shut off the power for 24hrs and let the ice melt and drain the water. This is pretty annoying and I am so disappointed. Before loosing any money on a recurring problem wanted to check in the community here to see on the reality of no permanent solution for this. Has anyone used Samsung authorized personnel and had a permanent solution for this?

Appreciate any guidance and inputs here.

I just posted a solution that has been working for me now for two years. See:

The fridge ran okay for about 18 months and then I started getting the fan noise from ice buildup. It was a long slog to figure out what needed to be done. At least in my case, my home-brew solution was very effective. The source of the problem was a bad evaporator cover seal. My assessment was that this was due to wires that were improperly routed at time of manufacture. Check out my other post. Good luck.

Thanks for the detailed response and links to the required parts. Tried replacing it, will need to wait and see it this solves the issue or not.

I would like to see the solution to the problem.  It was posted less then 2 months ago and is already archived.  Is there a way to access archived solutions?

Interesting that I am not allowed to post to this topic. I don't know how to access archived material. I may have to start a new thread to get you the info. Or there may be a way to send a private message to you.

Let me know if you have questions after seeing this. I hope Samsung will leave this alone for a while! It takes time to reconstruct!

Unfortunately, the thread and the post were deleted.. So, I'll recreate the message here.    My fix has been in use since 4/12/19 and so far no problems. Defrost cycles seem to have normal spacing and duration and there have been no error codes. I think the original problem showed up because of a manufacturing process control failure (bad wire position crushing gasket) and Samsung should accept responsibility.

Various models may have different, even multiple causes and different solutions to deal with evaporator freeze-up and fan noise.

Here's my information and experience

There are some good videos that show you how to open up the evaporator compartment in the back of the main fridge section. I have done this several times while trying various recommended solutions that didn't work.

I found some .05 mm thick foam sheet in my packing supplies. I rolled the sheet material into a compact sausage to match the dimensions of the remaining intact gasket. I loosely taped the rolled foam to the evaporator cover in the gap and reinstalled the cover. The fix was a success. I may not know for months if it’s a good long term fix. But in the short term, it's a resounding success.

How do I know it was a success without the use of extra test equipment? There's a control panel pad push sequence that can reveal any error codes. Here's how to do it:

While you are holding, the entire display will flash all elements a couple times, then go dark.

If everything is okay, you'll hear two tones descending.

If all is NOT okay, you'll see one or more error codes.

If you see -25E, then you have a defrost problem.

This is a really BIG problem! Once there has been a -25E code, the refrigerator section defrost WILL NOT RUN AGAIN until you unplug the power and plug it back in again! The freezer defrost will continue to work. Ultimately, with no defrost happening in the fridge section, ice builds up in the evaporator area and the dreaded fan buzz starts up.

Anyway, after fixing the gasket, the -25E error code has not returned.

Below are photos of what I found and what I did. After the photos are my thoughts about what went wrong and how the problems started.

The first photo shows what I found the first time I opened the evaporator compartment on 9/29/16. What drew my attention at the time was the hard ice buildup even after I had turned off the fridge for several hours. I missed an important detail at the time. The defrost sensor and heater wires had been positioned in the path of the gasket sealing an air distribution channel. This gasket is supposed to keep air from leaking to and from the inner part of the evaporator compartment.

The foam seal was designed to mate with a flat surface, not conform to an uneven surface such as wires running under it and even crossing it. You can see from the photo of the gasket that it did not recover from getting crushed. 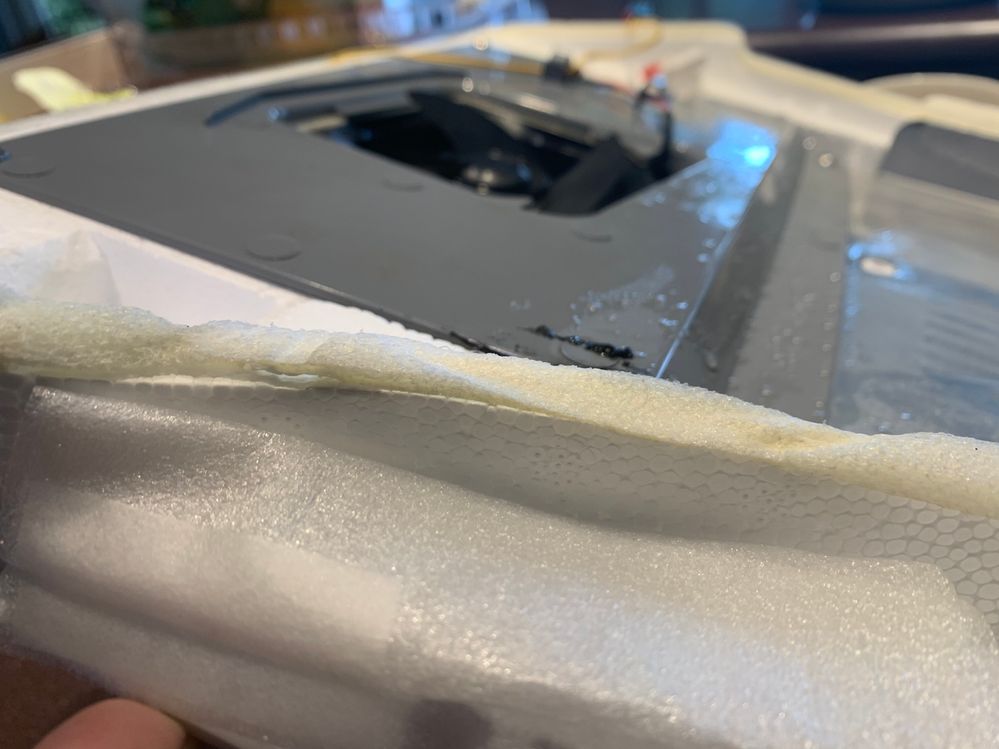 The seal must have worked somewhat because the refrigerator took 18 months to fail. Unfortunately, I did not know how to read error codes before the evaporator cover came off the first time and changes were made. Over many months, perhaps the defroster wasn't running long enough and ice built up gradually. Perhaps moist air was leaking into the evaporator compartment depositing more frost and increasing the defroster load beyond what it was capable of managing. 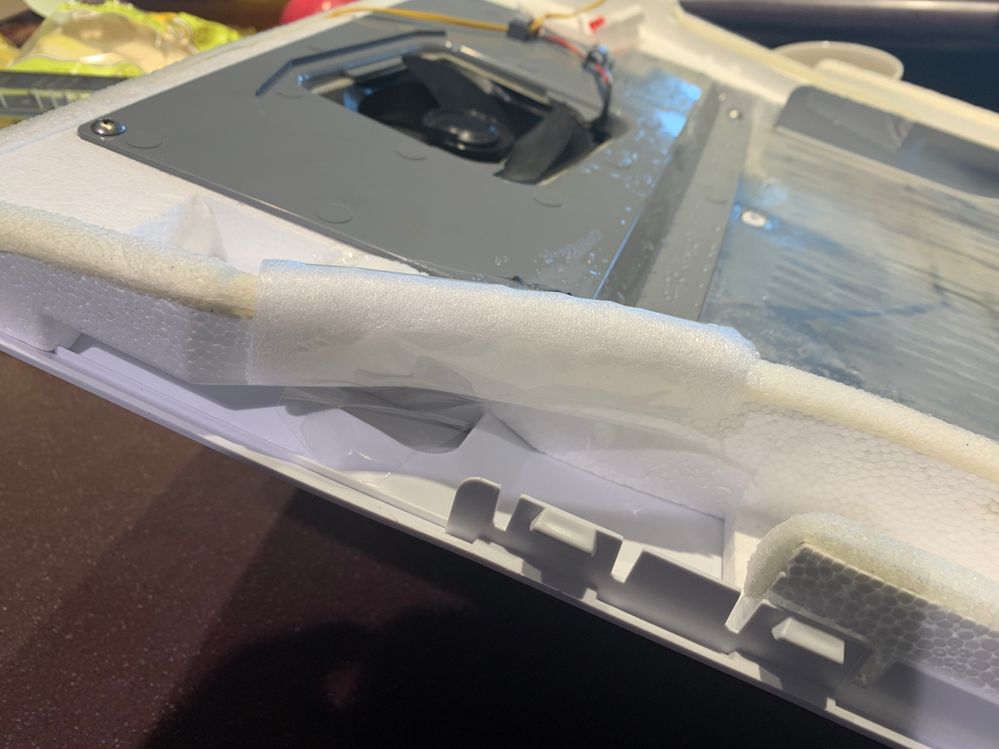 Failure that started with a leaking seal

My theory is that with warming and cooling cycles, expansion and contraction, the seal got worse over time to the point that the defroster had to run until it timed out, and registered a -25E error. That would shut off the defroster entirely, so it was only a matter of time that frost built up on the evaporator and interfered with the fan.

What determines the length of a defrost session?

Look at the photos. The defrost sensor is close to the problem sealing gasket. The sensor was designed to measure the temperature with the fan off, the heating coil on, and the chamber sealed from drafts. If the seal was bad, that could lead to so much ice build up that the defroster couldn't handle it. Or, air moving from outside the chamber might prevent the air near the sensor from warming up adequately to reach the defrost shutoff temperature.

What triggers the -25E defrost error?

It is simple. If the evaporator chamber doesn't warm up to 63º F within 90 minutes, the defrost system times out. How do I know that timeout occurs at 90 minutes? Advanced test equipment!

Power use graph shows dramatic change after gasket was repaired

I have the ability to monitor refrigerator power use moment-by-moment and see a graph of the results over time via a web-based interface. That made it very easy to show the before-and-after when I made changes. As soon as I realized that the crushed gasket and the position of wiring had caused the damage, I rerouted the wires away from the gasket and improvised a gasket repair. The graphs mostly speak for themselves. The refrigerator compartment defrost wire uses a steady 108± watts. The freezer defrost often starts a cycle, showing a spike to about 480 watts (108 watts of that for fridge). I think the refrigerator defrost starts at the same time as the freezer. Sometimes the refrigerator has its own defrost cycle without another freezer cycle. The flat profile at 108 watts is easily recognized as is the long plateau if the defroster times out.

In early January, a well-respected independent appliance repair person made several adjustments to the fridge for me. I had previously adjusted it to lift the front wheels off the floor. The tech checked the drain tubes and added a probe  carrying heat to the drain opening under the evaporator assuring it wouldn't freeze. The defrost sensor was moved to the refrigerant outlet tube, a standard recommendation. By late March, the fan noise returned.

In early April 2019, I installed a new defrost sensor in the preferred location on the refrigerant outlet tube. At that time I set up the power use monitoring. As shown in the first graph below, the defrost ran for 90 minutes and timed out. Clearly the defrost circuit was working because it was drawing the expected amount of power.

After this failure, I wondered if the sensor needed to be closer to the defrost heat source and back to the factory location. Then I noticed the crushed gasket on the evaporator cover panel. I repositioned the defrost sensor wire and the defrost coil away from the path of the gasket and improvised the gasket repair. Below is the graphed result showing no more defroster timeouts. After 9 hours to cool the fridge to a steady state, there was one long 56 minute defrost cycle. Ever since then, defrosts have ranged 30-45 minutes a few times a day. See below the graph for more discussion.

Power and defrost after gasket repair

Graph after gasket repair shown above

After this failure, I wondered if the sensor needed to be closer to the defrost heat source and back to the factory location. Then I noticed the crushed gasket on the evaporator cover panel. I repositioned the defrost sensor wire and the defrost coil away from the path of the gasket and improvised the gasket repair. Below is the graphed result showing no more defroster timeouts. After 9 hours to cool the fridge to a steady state, there was one long 56 minute defrost cycle. Ever since then, defrosts have ranged 30-45 minutes a few times a day. See below the graph for more discussion.

The gasket problem seems like the critical one for my fridge. Condensate (water) draining could be the most important for some fridges. I suspect that moving the defrost sensor may help some people, but I'm guessing that strategy is really just compensating for another problem like a bad evaporator cover seal. Whatever works…. WORKS!

Thanks Charlie,  That was a very good diagnoses and solution to your problem.  It looks like you have some good data to show the effectiveness of your fix.  I believe my issue is similar to yours.  Ice builds up in the same location due to air freezing.  I did not notice any issue with the wires interfering with the cover.  I assumed the air was coming from fan opening since it is only a couple of inches from the evaporator tubing.  What I did was adhered a short length of weather stripping between the fan opening and tubing where ice builds up.  My goal was to eliminate the space by the fan for ice to accumulate.  I also resealed the opening at the back wall where the evaporator tubing comes in.  Also placed some duct tape on the tubing where the ice starts.  Not sure if that will take care of the problem or not.  Only time will tell.

Sadly, after 5.5 years, I will say goodbye to my Samsung refrigerator tomorrow. The freezer stopped working a couple weeks ago, and another thread suggests the only solution is replenishing the refrigerant. This should not be happening!

To get us by, we bought a used fridge on Craigs List for $75. It's freezer works fine, but not the fridge. While away on vacation, the fridge on the Samsung started to fail. We are limping along for one more day.

The replacement fridge will be GE brand. Too bad my Samsung experience was a disappointment. When working well, I liked that fridge a lot. Sadly, it let me down.