I've a weird bug with my C49hg90dm. Sometimes when I turn on the monitor I've a glitched black screen followed by a strange cyan-blue screen stranded by lines.

I noticed that the monitor's menu still work in this state but doesn't appear because I can still turn off the monitor normally by pressing the main button, go down and pressing it again. Then when I turn on the monitor again everything works normally. It also work fine if the source change I think because the glitch desappear if I reboot the computer.

I don't know if this issue appear randomly or after a fixed number of power-up. I've also noticed that the image seems slightly different when the monitor is about to glitch on the next power-up.

I don't know if my description is clear ? It's not really annoying but I just hope that doesn't damage the monitor over time.

My monitor is plugged on a surge protector Eaton ellipse eco 650 and with a displayport.


I've managed to recreate it twice in the past half hour. Seems to occur more often from a warm PC. By that I mean PC running for a while. Shut down and restart without switching off at the mains plug. Power is still going to the monitor.

Tried this and got it to recreate the error twice.

Only way to clear it seems to be shutdown the PC. Switch off at mains outlet. Count to 10 so current clears and reboot. Then It didn't recreate the error. Obviously it does occur from cold now and again though.

Love the monitor and my only worry is that is this damaging the monitor or is it going to get worse?

I've been able to reproduce the issue even without any video cable plugged into the monitor, i.e. by just turning it on, but as you mentioned it's not something that occurs consistently.

Although not related to the power-up glitch, and I'm probably opening a whole new can of worms now, be aware that this monitor is also susceptible to image retention / burn-in. While running the EIZO uniformity test at 25% gray tone, I recently discovered that my unit has developed image retention of different elements that are constantly displayed such as the Windows taskbar, some desktop icons and the browser window. I have followed some recommendations to fix this without any success (unplug the monitor, run YouTube patterns, etc.)

So, about the possibility of damaging the monitor, I think it could happen if you inadvertently let the display to remain in the 'glitched' state long enough to develop image retention/burn-in of the vertical lines. Mine exhibited temporary image retention of said lines shortly after one of those 'seizures' but fortunately cleared up right after unplugging/plugging back the monitor (the other elements mentioned above, like the taskbar, icons, browser etc. are still there), if more time had passed, however (e.g. if the PC had woken up automatically due to a pending system update) who knows what might have happened.

I was somewhat willing to live with this power-up glitch but after discovering that image retention is also an issue, I have decided to start the return process and look for alternatives.

I also managed to get it to do it without it plugged in. Looks like it might be time to contact Samsung UK Support and see what the score is?


I also managed to get it to do it without it plugged in. Looks like it might be time to contact Samsung UK Support and see what the score is?

If you choose to go with the support route, they will probably dispatch a technician to your home or ask you to send the unit to a repair centre to have it inspected and then attempt to repair it or authorize a replacement. Personally, I would find this an unacceptable solution given how widespread this issue appears to be (we are now at 14 confirmations in the last three months and counting, including two replacement units). In my opinion, an investigation and product recall is in order.

Monitors and Memory
That's weird about the burn in issue as that is one of the main points Samsung are pushing with QLed technology.
The televisions have a 10 year warranty on the screen unit specifically against burn in.

Monitors and Memory
No. The button has no effect. Tried the saved presets too.
2 Likes
Share
Reply

I have this situation as well with my monitor. I bought this in mid January.  So far, only a total reboot will work. Can't tell you what the production date is since its in a hard place to get to where the montior sits.  I may end up returning this unit since I am nearing my 30day return.

Hello from Greece , I have the same issue on my monitor that I purchased before one week.

It has the exact problem as the photos shown before.

I disable from power management the sleep process as I don't need it and it stopped doing it.

Pls if you think it's going to have a problem in the future and need to be replaced inform me so I can start  the return process.

Thank you for this info! As this is a non-US model and support for these models is very limited, please seek support for your area. You can do so here: http://www.samsung.com/visitcountry. Thanks!

I have the same power-up glitch with my new C49HG90 Display. After trying differnet things now I'm sure that it depends on the connection type to your graphics card. When I use the inclueded displayport cable I have glitches. Then I tried out the inclueded HDMI cabel and switched many many times the display off and on again. No glitch!

To the guys who have this problem: Did you try to connect over HDMI? Do you have still this glitch? Which graphics card do you use? I my case it is a Sapphire Vega 64 Nitro+.

Tomorrrow I will buy another displayport cable with deactivated port 20. Probably this could help. I will update this post afterwards.

I am having the same problem.  When I reboot or boot my system (Mac Pro), I get the bright, white and various color bands on the screen. When I tried to use the menu button to turn it off or make adjustments, I can not see the choices to make selections.  The only remedy is to unplug the unit from its power and plug it back.  Then the results are back to normal.  Its happened several times (at least 4) since it was gifted to me in Christmas of 2018. I was able to take a picture of the display in how it shows for reference. 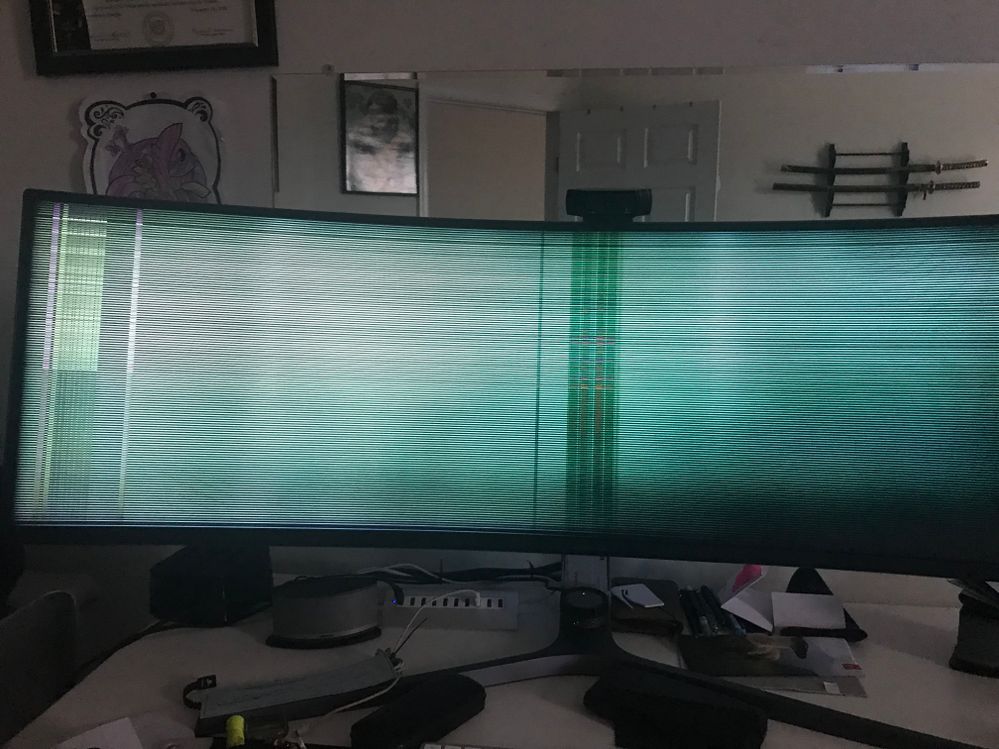 Learn to rest, not to quit!
0 Likes
Share
Reply