I replaced the hard drive in my HP Envy All-In-One 24qe with a new Samsung 970 EVO Plus 2TB drive.  The drive works fine for most operations, but when I install Magician and run the performance test, I get a blue screen with WHEA_UNCORRECTABLE_ERROR.

The temps get over 65 when this happens.  If I blow a fan on the drive while running the test, the test succeeds, and temps stay in the high 40s.  Without a fan, it fails on first test.  With a fan, it succeeded 3 times in a row (did not fail).

This is for an All In One computer, so I can't install a fan or a large heat sink on the drive.  A small heat sink seemed to help survive the test a little longer.

I am on the latest firmware, 2B2QEXM7, and using the Microsoft NVMe Driver.  I just noticed that there is a Samsung driver, which I will install now.

Ignoring this feels like a bad idea, because even though it seems to work fine regularly, it could fail at any time.

Thanks in advance for any ideas.

Monitors and Memory
The WHEA_UNCORRECTABLE_ERROR is simply your computer turning off before something breaks so at least that's working properly.

The 970 EVO Plus has both passive and active thermal protection but it doesn't sound like the active part is working correctly or very well. It's supposed to monitor and maintain optimal operating temp.

Looking at the 24qe it looks just like a monitor, keyboard and mouse. Where do you install the HDD? On the back of the monitor? I've never had an all in one and this is one of the reasons why. I like a full ATX case so I have plenty of room to work and plenty of airflow.

If the driver update doesn't fix it and it's still under warranty I'd probably return it.
0 Likes
Share
Reply

Here's a picture.  There is a metal plate that fits over the drive and back motherboard, then the back of the computer fits on top of that.  The metal plate only has a little bit of clearance for the drive, small enough that only the smallest heat sinks fit. 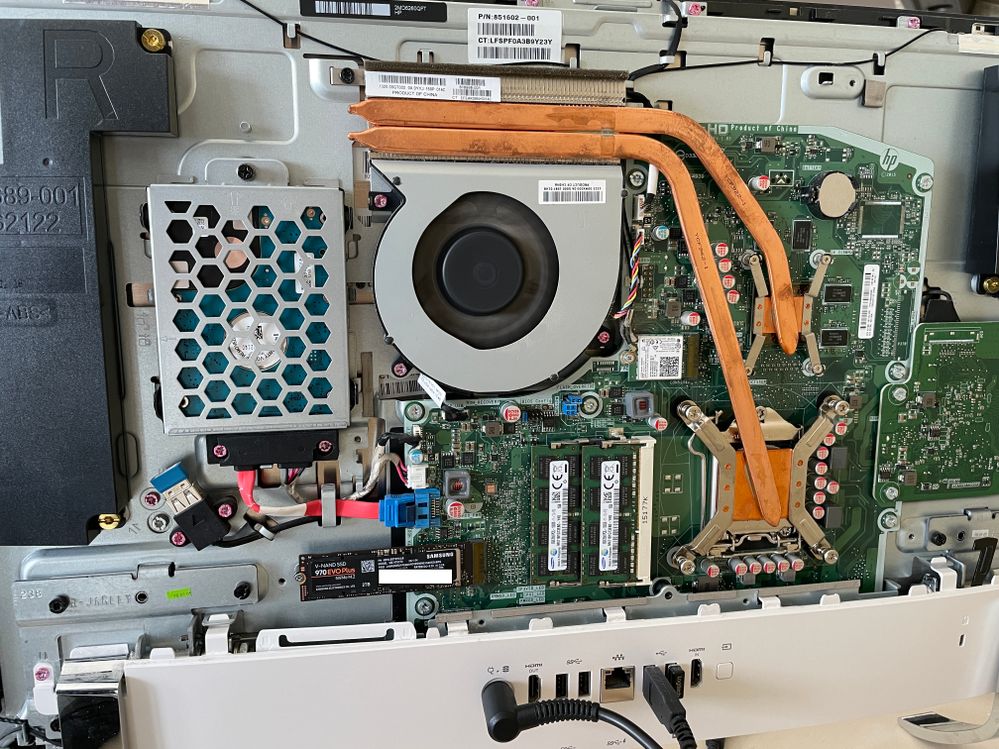 Monitors and Memory
Did you try the driver update yet?
0 Likes
Share
Reply

Yes, and it did not help.  Instead of blue-screening, it will hang the whole machine.

Monitors and Memory
I'd take it back then.
0 Likes
Share
Reply