If you use OLED server app, it will be much better than the display .....

Re: screen auto change color to blue like turning on bluelight filter after update to one uin2.0

This is most likely a software bug. If you go to dial pad, dual *#0*# you will see the screen gets fixed automatically and on going back it reverts to yellowish tint. I'm experiencing this issue on my galaxy s9 too.

Note 9 display issues after update. Samsung, you're going to lose a ton of users.

Samsung, pay attention: a huge number of owners of the Note 9 are having horrendous screen display issues after the recent android and UI updates. Symptoms vary but most users are experiencing a yellowing of the screen, lowering of resolution, and white washing of the display, and sometimes heating up of the device for no apparent reason. All of this right after the recent updates, mine specifically on June 22nd and glitches starting immediately afterward. Some users have been told to go to their Samsung service centers only to be charged for replacement of the screen since you are well aware that many of these models are out of warranty at this point. This is criminal since the display problem is a software/firmware/update issue and NOT a hardware issue as you are leading people to believe. Many users feel betrayed by Samsung's lack of transparency, honesty, or even acknowledgement of the issue. I can tell you right now that if you don't roll out an update to fix this display issue or offer owners to replace screens for free then you will lose a great number of loyal users, permanently. I am already considering going over to Apple even though I always vowed to be a faithful Samsung user. The lack of action on the part of Samsung so far is despicable. Do not leave your users hanging or you will see the results. A supervisor or high-level tech manager should follow up. This should go all the way up Samsung's chain of command since you have essentially turned a flagship device into trash, you should have learned your lesson after the over-heating debacle in the past. Please note that this issue has to do with the adaptive display since the issue gets better with certain actions such as the "video enhancer" feature that certain apps like Netflix uses. Image of the display problem is attached.

Update 8/25/20: As of last night Samsung pushed a security update (N960U1UES5ETH1 dated 8/1/20) that returned my screen back to normality. I will keep everyone posted if it starts glitching again. I think Samsung finally got the message but should have really acknowledged that there was a problem in the first place. Samsung should also reach out to those users who unnecessarily spent money on changing their screens out of pocket. Good luck everyone. 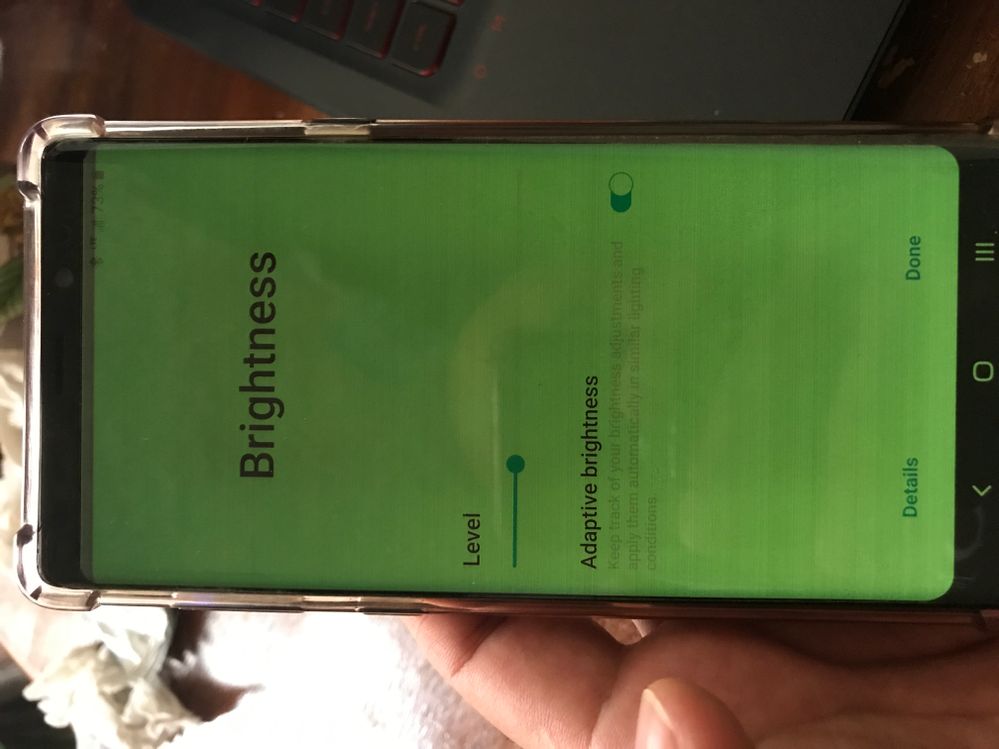 It only happens on the home screen, in the applications it does not happen ...

That may be the case for yours. For a lot of us it happens on all apps except those apps which uses "video enhancer" like Netflix or YouTube. That proves that this is a software glitch because if the display would have really gone "bad" like Samsung tries to make us believe, then it would manifest the yellowing of the screen everywhere.

I have 2 note 9, both of them bought in Indonesia XID, XID/XID, XID, one of it have been modified to DBT, XSP/XSP, XID, the XID one did change to green layer in certain brightness, below 1/4 or 1/5 slider can't see the green layer, the DBT one didn't show any green hue problem.

why DBT instead of XID, faster security update by 2 months.

still no word from any Samsung representative here?

Nothing, nada, zilch. Samsung is completely mute on this issue. They could at least come out and admit that an issue exists. That would validate what many of us are experiencing at the very least. But it's a stab in the back to make us feel crazy by telling us that it must be a hardware issue and to take it to a local service center where they will charge us half of the phone's cost to change the display. Not good. This will be my last Samsung. They are even censoring me on this forum whenever I mention legal issues.

I had this issue after updating last march i believe, then things got worst last july update when lock and unlocking the the phone.

I tried everything but still no luck. Then

There is an app on samsung called app booster.

I think you can download this app via GoodLock app on samsung store or NiceLock via google store. (Make sure you have the latest version)

I did try to do the app booster thingy again. And it seems the problem went away.

Just searching this solution. Let me know if it works to you as well.