Note20
Samsung Community,
I have been having issues with my new 20 Ultra almost immediately after activating it and getting it set up on AT&T's network. Randomly and it seems for no reason (I have full coverage including 5G at my home address) my Note 20 Ultra 5G will completely disconnect from the network while displaying that I have full coverage in other words the bars are full. This issue has happened while watching YouTube videos, while talking to the Google Assistant, while browsing Facebook, or even simply searching something on the web..
I contacted AT&T about this several times and they troubleshooted my phone the first time and found no issues and told me to call back if the issue persists as it could just be a network issue that hasn't been identified yet, that was almost 3 weeks ago, but I did call back a second time..
The second time, which was a few days later they did another troubleshooting and found no issues, but I didn't want to be told to just wait it out and the representative decided to do a reactivation of my phone to give it a fresh connection to the network, that worked for maybe an hour and then it went back to doing the same thing. I was told by AT&T that there was nothing else they could really do on their end and it must be a phone issue, that being said I reached out to Samsung and let them know that AT&T had troubleshooted my phone found no issues. There was and still is in fact this same issue, which was at this point getting worse and worse and happening more frequently.
Samsung decided it must be something with the phone that isn't working properly since AT&T's troubleshooting found no errors and they decided to send me a replacement device. I got that device a few days ago and have been using it, the issue seemed to have been with the old phone, or so I thought.
Up until yesterday my replacement device was fine, but now is doing the exact same thing and is getting worse. I haven't touched any of the settings for network connection or mobile data connection as I did with my first Note 20 Ultra 5G in an attempt to fix it myself so I'm dumbfounded as to what could be the problem. Google did release a system update which I did download and install, but the issue had been occurring prior to that so I do not think that has anything to do with it, in fact I was hopeful that by installing that it would correct the issue.
That all being said, has anyone else been having issues with their note 20 Ultra either on AT&T's network or any other network?
If so what did you do/what did they (samsung or the carrier) do to fix it?
It's really frustrating because I've done everything I was supposed to do as recommended by Samsung such as turning mobile data off then on, restarting the phone, trying airplane mode, and yet nothing seems to work. I had a Galaxy S10 for almost 2 years and it gave me no issues, I've had the Galaxy Note 20 Ultra 5G for one month and I'm worried I'm going to be stuck with a phone that is just going to keep disconnecting from the network and then I'm just going to have to deal with it, in which case I would just like to get a different device all together..
Sincerely,
A frustrated Note 20 Ultra 5G allegedly "breakthrough phone" owner. :face_with_rolling_eyes::pouting_face::tired_face:
#Note20Ultra5G #Note20 #Note20Ultra #ATT #Connection #Network #Issue #Connectivity #MobileData #LosingConnection #5G #AT&T #Samsung
6 Likes
Share
Reply
22 Replies

Note20
I have been having issues for a month now. First, couldn't get videos thru email that I was previously receiving with no issues. Then couldn't send videos either through text or email. 2 trips to the AT&T store and they switched me to a 5G sim and 5G plan and it worked in the store and then back to the same issues a few hours later. In the meantime I star noticing that I'm not getting all of the responses in a group text and sometimes not even getting the original text only some of the responses then I start getting texts asking why I'm not responding when I never received the texts. also my phone starts randomly showing "no network connection" and sometimes when trying to send a text I get an error that says it wasn't sent but will be when my connection returns. Called AT&T and they do a network refreah from their end and it works fine for a couple hours. I call back they had me do a soft reset if my phone, again works for a bit and then back to the same issue. Call Samsung they have me reset my network and again works for a bit but then back to issues. I am literally popping my sim card out 4/5 times a day to reset my phone. Been dealing with this for a month. I'm a lone android user in my familyand one of a couple in my circle of friends. I'm seriously considering going to the dark side. I couldn't wait for this phone to come out and I am so disappointed and frustrated.
1 Like
Share
Reply

Everyone!! This didn't fix my issue fully, BUT I totally just found a way to boost your speeds!!

Go to the Phone app and dial:     *#*#4636#*#*
It will open a service menu
Click "Phone Information" and set your preferred network type to LTE/WCDMA
**NOTE** Your phone will show 4G LTE instead of 5G, HOWEVER it is a much faster connection! Haven't messed around with these settings much yet, but my speeds went from around 30 Mbps download speed 13 Mbps Upload speed to 104 Mbps Download speed 32 Mbps Upload speed!!!!

My initial setting was set to Unknown for some reason. I just wish I could fix the hanging and freezing of the internet issue and this phone would be a dream 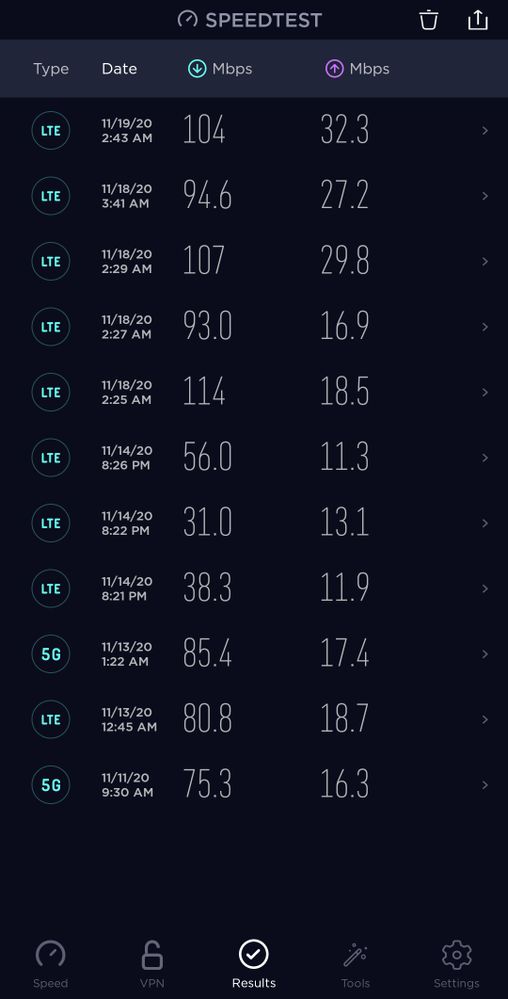 Awesome man thanks for posting this! I realize everyone bought the phone expecting 5G to work as advertised. I don't really care and just want a connection. This was the ONLY thing that work so THANK YOU SO MUCH! Still extremely fast BTW.