The tv came, I unboxed it, and I set it up under my Q90T that is mounted on the wall. I did this so that I could watch the same content on each tv and compare them. Before I even had the chance to start comparing them I noticed thin 1/2 inch vertical lines that ran all the way across the tv. They were clearly visible. Wondering if it was a setting issue I decided to try and go through the setting to see if anything helped. After an hour of changing and trying every combination of settings possible, I finally gave up and realized it had to just be a bad panel. I also made sure it wasn't the result of the content I was watching. I did this by putting the same content on both TV's, my Q90T and the QN90A. Only the QN90A had the "bars/Bands". I returned the tv to Best Buy.

A week later I decided to order the same tv from Samsung since they had restocked it. Yesterday my 85" QN90A arrived from Samsung.

I did the exact same thing I did for the first tv. I set it up under my Q90T and started to "examine" the picture. Immediately I noticed a large water bottle sized dark "DSE" spot near the top left portion of the screen.  This alone was enough to warrant a return, but that wasn't all. This tv also had the EXACT SAME thin 1/2 "bars/bands" running vertically all the way across the tv. I can't even begin to explain how upsetting this all has been. The idea that one of Samsungs best TV's has this problem is absolutely absurd. It's not like the QC people testing these panels didn't know or see that the panels have this. I guess they just don't care.

I had always been Samsung brand loyal, but that will be no more! I am going to buy a Sony or LG tomorrow.

It might be hard to see but I will include a picture of the bars. In the photo don't pay attention the lines in the clouds, that wasn't there in real life. Instead look at the blue above the clouds and you can see the lines I talk about. Remember, they run the length of the screen vertically in any solid color, and also all the way across the screen. If I had taken a picture of a solid grey screen, the lines would have been visible vertically across the entire thing. HOW ABSURD! 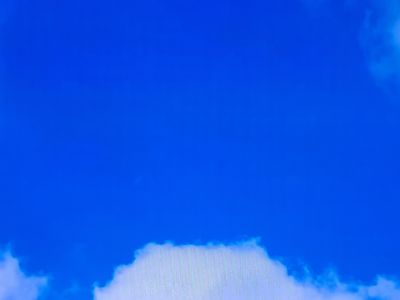