3 weeks ago • last updated 2 weeks ago

I wanted to know if anyone else is experiencing problems with achieving 4k 120hz + HDR with the new RTX graphics cards on the current Q80T/Q90T models.

With number of feedbacks from a small community on Nvidia including myself, we noticed that enabling Input Signal Plus (or so called HDMI UHD Color) in order to use VRR on Game Mode results in an unstable, flickering state and will not work properly.

As a reference, it looks something like this: https://www.youtube.com/watch?v=RBc_qmA3nx4&feature=youtu.be

We have tested rigorously through the past week trying out tens of HDMI cables (we know they're not "Certified" HDMI 2.1, but are advertised as Ultra High Speed HDMI with 48gbps output), different resolution+refresh rate settings, and with the last two known updates to Samsung TV firmware (1302, 1402.1) as well. Nvidia also released two driver updates so far however, the problem doesn't seem to resolve at all.

Interestingly, Input Signal Plus on other ports besides Port 4 (hdmi 2.1) works perfectly as they should, whether it's connected via hdmi 2.0b or hdmi 2.1 cable (limited bandwidth by the port anyways), with maximum setting of 4k60hz + HDR on 4:2:2 subsampling. The problem occurs as such in the above mentioned video ONLY when Input Signal Plus is enabled for Port 4. You cannot set the resolution higher than 4k60hz without that setting.

After numerous attempts at different cable lengths and models, PSU swaps (6pin+6pin on different source), and gathering reports from the community with verified issue on all Samsung TVs, we are inclined to believe that it's likely a firmware / support issue on Samsung QLED and its proper HDMI 2.1 support.

LG CX/C9 also had a similar issue (G-Sync related) but was followed up by their team and was resolved with a firmware update to the LG TVs.

I reached out to Samsung via Twitter but was simply told to let Nvidia know lol. Not very helpful so far.

If anyone else here have had a similar experience or resolved it on your own, we would love to hear it from you.

We are aware that the user manual on the TV's only list 2560x1440@120hz or 4k@60hz for VRR as officially supported resolution and refresh rate. However the issue is persistent even when VRR is disabled both either via Game Mode (TV Setting) or Nvidia Control Panel.

tl;dr Port 4 currently has issues even for hdmi 2.1 bandwidth usage. 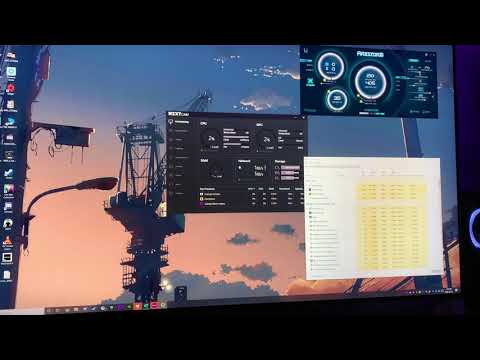 Hey! I just wanted to say that I'm having the same issue as discussed in the video. I've tried a couple different 2.1 HDMI cords to no avail. I was also told by Samsung to contact Nvidia despite me thinking this is probably an issue that Samsung would need to fix, lol. Either way, I tweeted at Nvidia Customer Care about this issue just a few minutes ago, and encourage anyone else with this problem to do the same.

Can confirm this issue. Even when not messing with VRR(which imo puts a dark sheen over the screen and crushes blacks, so I usually don't use it anyways).

I have to physically reconnect the hdmi cable every time I power on my Q90T. If I don't I usually get no display signal, on the rare chance it does handshake, flickering until a physical reconnection of HDMI.

I also reached out to Samsung via Twitter and was told to set TV to 60hz and to buzz off and contact Nvidia. Not at all happy by that response.

I can also confirm issues relating to using VRR with Nvidia on the RTX 2080Ti on a Q95T.
When Using VRR 'shadows' in dark areas become overblown and actually highlight.

When activating Nvidia's G-Sync it does say that it is not validated as compatible and I belive similar issues happened with earlier Freesync monitors when they first entered the market.

I have tested over a few nights, multiple resolutions, Hz rates, HDR on/off, colour bit depth, TV modes and have always found this issue repeatable everytime with VRR as the main cause. Hoping to hear more news on this soon. Will keep an eye on it for sure.

Edit: I also tested an Xbox one X, using AMD freesynd to see if the issue was an overall HDMI issue/TV issue and it is not. Using Xbox one X freesync I was able to play some very dark areas that appeared perfect in picture with VRR on.

No such issues and smooth blacks when VRR off

VRR on. Using Chaos Theory as a dark test area we can see shadowed parts of Sam overblown. This does not occur with VRR off.

I have been Googling since getting the rtx 3090 and the 55" Q80t about this problem.

I bought two expensive hdmi cables that could do 48gbps and the first one caused flickering so hard I couldn't bear it. The second was pretty bad too, this is all only after turning input signal plus on so I can get 120hz.

I spent at least 3 hours with support trying to sort this out, until finally I just used my hdmi2.0 cable which much have been 2.0b. As it instantly worked with 120hz, and I also found that it was 4:4:4 chroma or whatever, but HDR doesn't seem to work.

Anyway, I have another cable arriving in the mail on Monday hopefully... and I will try that out, but now it seems like a firmware problem and Samsung need to help us out!

Welcome to the club!

Yeah - after talking to many others, getting different HDMI cable is pretty much futile at this point unfortunately. We have more than 10-15+ cables already tested from various vendors on Amazon and others - to which some of the cables performed "better", but eventually they all produced similar issues.

I am also back to using 2.0b...hope Samsung or Nvidia makes a note of this

Well if this continues, I still have warranty on the TV. And this must be covered...

I have bought a Pacroban cable as someone recommended it, but you're making me feel a bit hopeless.

Also, do you still get very little flickering with the hdmi2.0b? I get a flicker every 5 minutes or so.

I don't personally see any flickers using hdmi 2.0b cables, but ONLY if I'm connected to other remaining ports (1,2, or 3). Using Port 4 for any bandwidth or cables seem to cause the flickering issue.

Yeah, it's a shame the way it is as we haven't heard any updates regarding this. Even an acknowledgement would be great from either Nvidia or Samsung...

Thanks for starting this discussion! Same happening to me: RTX 3080 on 55" Q80T. I got that Zeskit cable on Amazon, and things seemed to work great for a week. Then, I started getting flickering and screen blanking when running 4K at 120 Hz + HDR. For now, I've kept my refresh rate to 60 Hz + HDR, and things have stabilized.

Another issue I'm having is that, if I'm turning on the TV for the first time in about an hour, I can't switch to my PC on HDMI 4 immediately. I found that switching to another input (e.g. the cable box on port 1) and then toggling Input Signal Plus off and on for HDMI port 4 then allows me to switch to my PC. Saves me getting up to unplug the cable, at least.