I purchased my 49" QLED TV, Model No.:  QN49Q60RAFXZA, 17 days ago, set it up, and enjoyed a beautiful picture for a number of days.  Yesterday, I carried it carefully to another room and mounted it on a swing arm.  When I turned the TV on, the LED was cracked on the left side, with both vertical and horizontal lines in the corner and across the screen.  The TV was only handled by the frame.

I contacted both Best Buy (where purchased) and Samsung, both responding that the crack as "customer damage" not covered by warranty and not returnable/exhangable.  I'm still waiting for Samsung's Service/Repair Group to contact me, but have already been told that cost of all repairs would be on me and that replacing the LED/LCD screen would likely cost as much as the TV itself.

I've owned dozens of LED/LCD TVs, monitors, and laptop computers, of varying sizes, all of which have been moved multiple times, yet none of which have ever cracked or failed in such a manner.  I followed all of the handling instructions and warnings when moving this 49" TV, yet it still cracked.  I can't believe that Samsung would produce such a fragile product, especially a premium product, and not be willing or able to replace it.  My 2008 Panasonic Plasma TV has been moved at least 20 times since purchased and still has a flawless picture and screen that rivals the 49" QLED screen from Samsung.

How many of you have had similar issues handling your QLED TVs resulting in cracks in the LED/LCD screen?  We are far from alone, and Samsung should stand behind their products much more solidly that what I'm experiencing now.

Yes. I've had two do this. The first was replaced by the mover, the replacement broke in the next move with no major impact. I have moved other screens of many types literally hundreds of times with the Samsung's being the only ones to break ever. Also have a washer and dryer from Samsung, washer had to be serviced due to recall and dryer has broken twice in first 4 years. Samsung consumer appliances and electronics are junk in my experience and I will never purchase again.

I have exactly the same model. In my case , I wasn't very lucky to use it at all. When I arrived home I turn it on and the screen is cracked. the TV was light and I was very careful handling it. I'm a materials Engineer and and I know the Quantum dots materials inside it , which is something experimental. This TV in particular is discontinued for some reason , I think there is a cover up here , and we should be compensated for our loss. I have a Samsung TV from 2014 and I moved three times and didn't have any issues with it. This one from Best buy to home then cracked???

After a long love fest with Samsung televisions and nine tvs installed at three locations, I'm switching to the OLED manufacturers. Samsung's proprietary QLED screen consist of 10 layers of fragile glass panels. After carefully mounting a Q80, a subsurface crack (only discernable when powered on) rendered the screen image unviewable. Samsung calls it "physical damage" - not warranted - of which there are numerous complaints (Google it). The only fix is a replacement screen for which they charge more than 80% of the original cost of the television. One of life's expensive lessons! 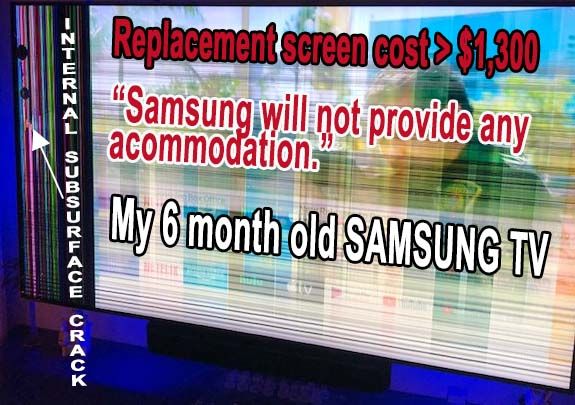