Questions
ATTENTION PLEASE
I'm seeing articles on Twitter, Google, Forbes, etc. about the stable being released for MY phone. The phone I have is getting the OneUI 3.0 but not on ours?
Has anyone here received the stable?
Why wouldn't we get it first?
Why isn't there somewhere where we can get constant truthful information about the beta program and actual release dates estimates.
If you were private devs writing code in your basement I'd wouldn't ask. But you're not.
0 Likes
Share
Reply
5 Replies

Questions
I doubt anybody that received the update will reply as once you install the official update you are automatically out of the Beta forum.

this was a reply from Beta moderator early today, it might give you a little insight to why the update for respective phone carriers are being rolled out at different times. disregard the second part of the response.

I don't know what carrier you're with, but
I'm also including a screenshot from tmobile update page were it shows still in Development, carriers are different how they test the software before official release even though that tmobile was one of the first carriers to release android 10 last year it seems this time they're taking a little longer, but I'm sure there's a good reason as I would not be very happy at all with my carrier to give me an update that is going to give me a ton of problems...
All S20 series are getting the update before the end of December 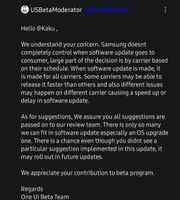 Questions
Here's the funny part, Samsung is responsible for MY UPDATES, being that I have one of their unlocked phones not branded to my carrier AT&T.
0 Likes
Share
Reply

Questions
I own the S20 ultra unlocked on Tmobile and if you think about it, actually we were the first ones with access to the Android 11 for a while now before any of the carriers :smiling_face_with_smiling_eyes:.
Besides this being possible the last Beta there isn't much we're missing from the official but just the fact that the official is certified and minor bug corrections..
To me personally this Beta program has been way more stable from the beginning than when Samsung released the Android 10 Beta program to the public, don't get me wrong I'm with you and getting updates sooner than carriers, but I want to think there's a good reason for the delay as our phones need to work smooth on any carrier
0 Likes
Share
Reply