Smart Home Support
I bought this vacuum about 2 weeks ago. I decided on this one because it has a mapping report. In short, it does not! Do not buy this if you are wanting this feature. it is clearly labeled on the box that it has a coverage map report and even shows a picture of a phone with a coverage map. I called in to Samsung and the representative said I was mistaken about the box. then he told me I could return it to where I bought it from and they would give me the model that has the mapping feature. I don't think it's the retailer's fault that this product is sold with false advertising. I would like Samsung to call me and either show me how to get the map on this or get me one that can. Take a look at the picture and text on the box and call me to discuss. 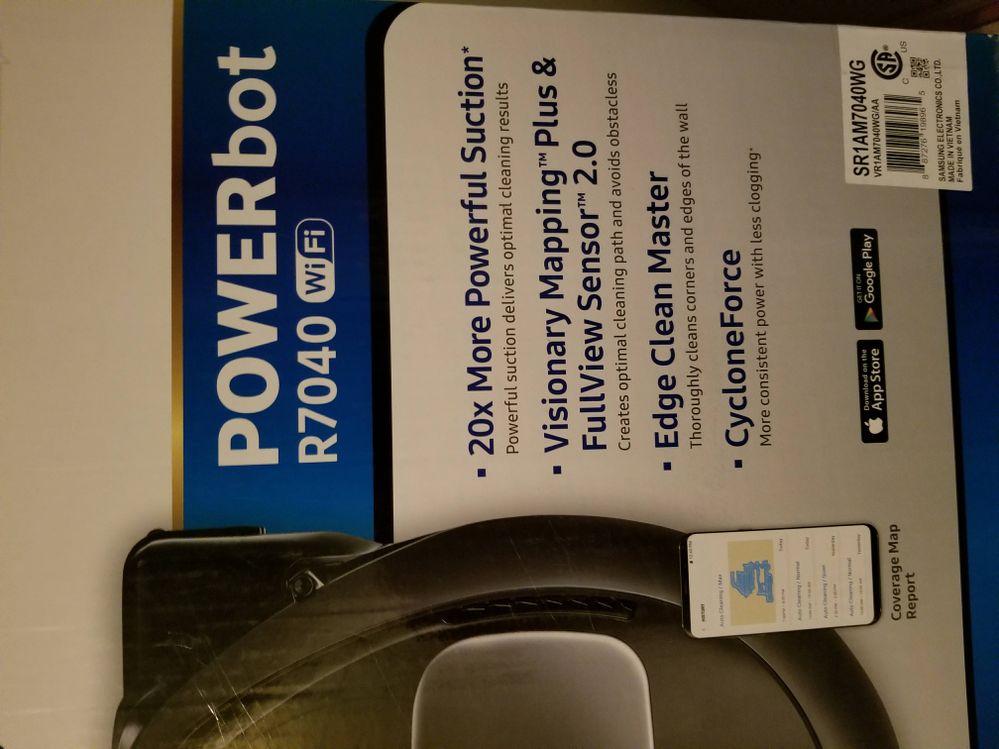 I am also disappointed in the mapping feature in the Samsung Connect app.  Also the answers from Samsung Moderators have not been helpful as the keep saying use Samsung Connect app and check under history and prior users state that is the steps completed.  I do not feel it is user error but a software error.

The troubleshooting link does not have any relative information to the issue.

I would like someone from Samsung to call me.

I apologize, our social media team does not offer phone support.

Could a Samsung rep please answer the question of whether the mapping features missing from the connect application are slated to be added or not?  And if not, what is going to be done to compensate purchasers of a product that completely lacks key advertised features?

Sadly features are always subject to change without prior notification, due to this we cannot compensate/reimburse for lost or changed features. As far as the update goes that may or may not add this, we are unable to speculate on the release of future updates.

That is the wrong answer.

So I could eventually end up with a PowerBot that just drives around my house doing nothing but knocking stuff over and I'm just supposed to say "oh well, that's just Samsung removing features".

What if my Samsung Galaxy S8 suddenly didn't call people anymore? It's advertised as having that feature but unfortunately, that is subject to change as well.

I have a lot invested in the Samsung ecosystem and I had planned to continue adding and upgrading with more Samsung products but if Samsung is selling products that never actually do what they advertise they do then I am not a supporter of Samsung.

I will throw out ALL of my Samsung products and invest in an ecosystem and company that does not disrespect it's customers with false advertisements and blame it on "features are always subject to change without prior notification". There are plenty of other options for all of my devices.

For anyone reading this:

They have not yet reached out to me privately or tried to make this right.I did call in to the support team and the answer I got was:

Take the Powerbot back to Best Buy and they will exchange it for another one that supports the mapping feature. He also didn't believe me that it was advertised on the box until he pulled up an image of the box on his computer.

When a consumer spends almost $600 on a vacuum they expect it to perform as it is advertised.  If I wanted to micromanage my robot vacuum I would buy another brand's model at one third the price.

If Samsung's attitude is going to be "buyer beware," and remove key product features on a whim, then that's their prerogative.  Customers such as myself will find better companies in which to place our loyalty.

So why did this topic shut down. I am still getting no mapping in my history for my r7040 vacuum. Where is out product support? Can we return these vacuums and get a refund or at least a credit towards machines that operate as advertised?

All Samsung has to do is to dedicate on or two programmers for probably a week on this issue to get it to work!

I have been busy at work but I'm not ok with this and I'm not ready to let this go.

Samsung has not provided us with a solution and it doesn't seem like they are going to. I am still waiting for a solution from Samsung!

We are getting nowhere in this forum and I have received less from phone calls.

Samsung, do you have a solution?

At this time you'll need to use the Samsung Connect app. There is no mapping option.  It does the mapping and stores it internally.  Once it finishes vacuuming, you can see the map by checking the history.  In Device control, you can either swipe down from the top and pick history or in the touch menu in the top right, select history. We have asked them to update this to how the Smart Home app uses mapping so that it can be seen prior to and currently there is no information on when/if this will be added. Very sorry for any inconveniences caused.