Tablets
I'm using a Galaxy note 10+ and wifi only Tab s5e. My phone is on the T-Mobile network. Until July 2, I could call and text from my s5e. Now I have a most peculiar situation. I use the default messages app because it connects with my phone, tablet (until July 2) and watch without any problems.
I can call using the tablet, no problem. The issue is this. When I send a text with the s5e, the message sends and is received, but the s5e shows the message didn't go through. I receive replies to the text on the s5e, but the outgoing messages still show unable to send errors.
On both devices:
I have cleared the cache, cleared the data, power cycled the phone and s5e, turned off the call and text from other devices settings, and reset the network on the phone. The messages still show they did not send, but they are actually sending.
Anyone have any idea how to make the messages show that they went through? 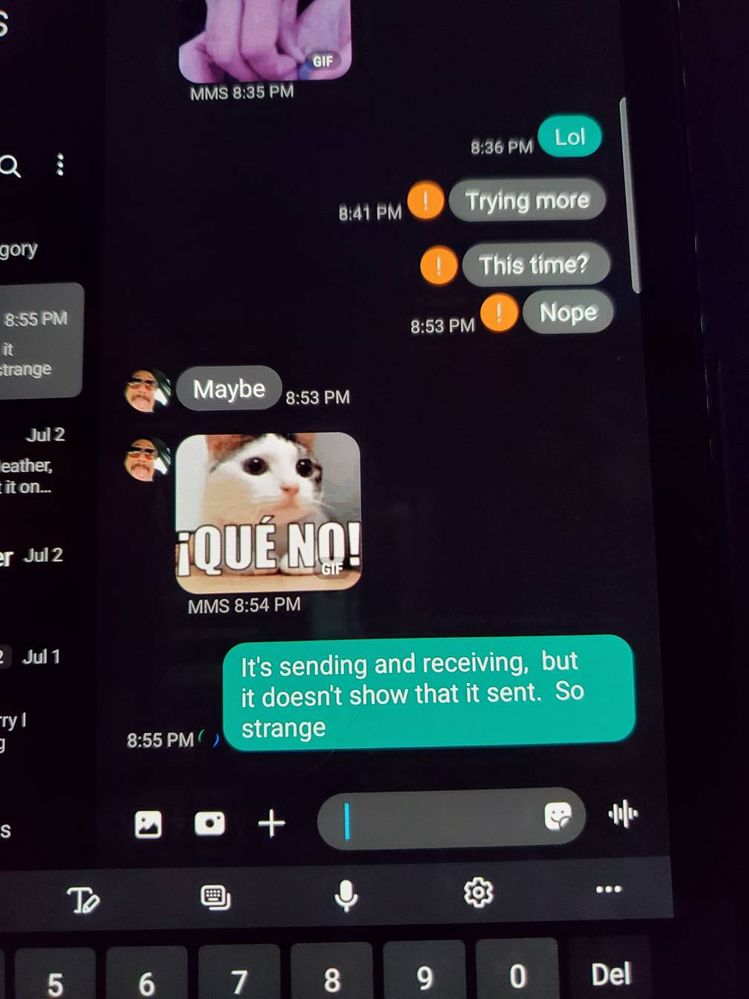 When I'm troubleshooting and texting to the person in the other room, this is only an annoyance. I would like a fix though. It worked until July 2.
1 Like
Share
Reply
5 Replies

Didn't see your post until I put up one of my own with the exact same issue.  I'm also on T-Mobile, using a Tab S7 and a Galaxy S20+ phone.  I've tried everything you have - and more to no avail.  I guess the only positive thing is seeing someone else with the same problem, so I know it's not unique.  If you figure out a solution, please post!

Tablets
Thank you for the reply. I am glad this is not only happening to me. If I find a solution, I will post it.
0 Likes
Share
Reply

Tablets
Today, I tried syncing the messages app data from my phone to the s5e. I used my Samsung backup that was from the auto-backup last night. That made no difference in the situation.

I turned off the tablet overnight and restarted it this morning. No change. Messages are still sending, but do not show as sent.
0 Likes
Share
Reply

I found a fix that seems to be working for me.  I switched from the stock Samsung messaging app to the Google messaging app.  I had to link the two using a QR code, and now everything seems to be working.  (At least after one day.)  ... FWIW, I also discovered that multiple text messages were not coming through to me, with no rhyme or reason - a problem that started around the same time my tablet began acting up.   (I found a fair number of threads with T-Mobile customers having the missing text issue, too.) ... Though I can't understand why, maybe all of this had to do with the Samsung stock message app.  Or at least I hope so.

Tablets
Thank you for the reply. I did change to Google messages, and it didn't fix my problem.

I ended up doing a factory reset on the s5e. The first date restore was from a backup of the s5e. The problem persisted. Second days restore, I used data from my phone. That somehow solved my problem. I still don't know what caused the problem on the first place, but because the s5e is really just used for my entertainment, and everything was backed up, pictures videos etc., if we really just an annoyance to do the factory reset.

Good luck to anyone else with this problem.
0 Likes
Share
Reply