Tab A7 will not factory reset

I bought an A7 back in September to use in my store. It didn't do what I wanted it to do exactly so I decided to just keep it for myself. Had a bunch of stuff to do around the holidays so I didn't get to mess with it until now. I charged it up and turned it on and it wont take my password. I tried many many times and nothing worked and it also never gave me an option to reset it. I tried to reset it on the find my device app but it wouldn't do it there either. It said find my device was not turned on even though I turned it on when I set it up. After searching I found an article that said I could factory reset it by holding the power and volume down button then switching to power and volume up button when the device went off. This doesn't work either. It never makes it to the reset menu. I've watched a thousand youtubes and read a thousand articles and nothing works. I've called support twice now and was told it must be a software problem, but I cant send it in to be repaired because it has to be reset before I send it in. so... Do I just have a $200 paperweight now?

Pulling my hair out over this. Dad bought a Galaxy Tab A7 for a charity that distributes to shut-ins and connects them with the donor for tech support.

The first recipient passed away right after receiving it. They retrieved the tablet and gave it to a second recipient. Once he got it he was not able to get logged in or reset it.

I told dad to send it to me... I can hack into anything. OK, so apparently not. 🙂 At least with an old iPad I was able to contact Apple and speak to someone and then after 40 days they unlocked it for me.

Have tried all the suggestions and key combinations shown around the web to no avail. It doesn't go to the BIOS looking reset screen... it goes to a screen that says "Your  phone was factory reset. Enter your password to unlock it." From there I've tried using a Google account... etc... no avail. If it was actually factory reset it would be allowing me to CHOOSE a password.

A factory Reset does not return the device to a first time ever ready for setup condition, it returns the device with the factory load to the owner 's account.  It does not delete the registered owner's logon info.

I'm guessing that Samsung must get hundreds, or thousands of calls a year from people who either stole a device or bought a stolen device and each one of them has a story to tell and that's why their policy is as it is.

I plugged it into a laptop and it's only charging. To power off, it asks for a password. I can't get to a reset screen or anything. This is ridiculous

If you registered with Samsung.com go to findmymobile.samsung.com and you can reset the password and/or factory reset.

Hi I have a A7 Samsung Lite it is stuck in Retail Demo Mode. I can't Unlock Development Options via the Seven Tap Method. When I enter Recovery Console there is no option to Reset to Factory Settings. The Code 5444 and password don't work. So what is the code for this device anyone? 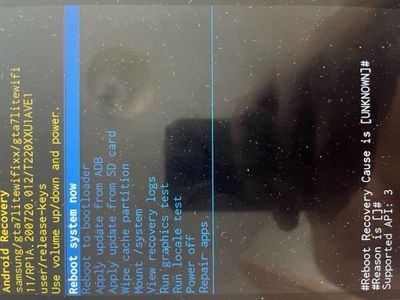 Same issue with me...anyone  can advise? 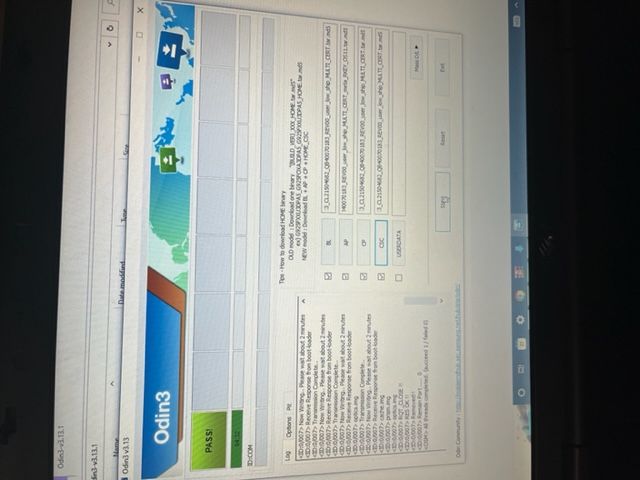 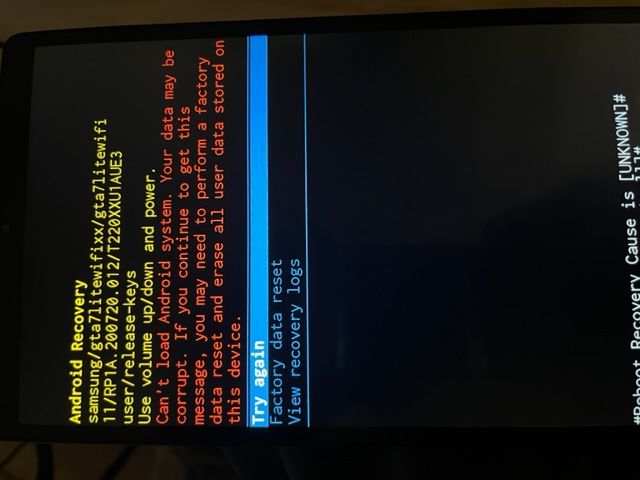 Update I decided to Flash my device with Odin Tool. The great thing about this, the device doesn't need to be Rooted. Download the correct Firmware for your device. After this Reset should appear in the Recovery Console. You can then Reset your device like New. Retail Demo Mode is Deactivated or you can uninstall it afterwards. But when you return to the Recovery Console Reset is gone again. But Development Option still doesn't work. But I don't care about that. Download Mode it not difficult. Then follow these instructions below.

Right I Flashed it again still no Development Option even with the Stock Firmware. Some other settings are missing. So I have come to the conclusion there are different versions of this tablet. Also you will noticed it Flashed ok, but there is an Error Message what I did was press the Start Button in Odin Tool, then tablet went into a Process of loading the files and then booted up normaly.

Can someone steer in the right direction for the Firmware that Includes Development Options etc?

I hope you have been able to get your tablet reset- I'm adding to this thread in hopes it can help others as well. Like many people I tried the method described by numerous posts, never worked.  Until...

I connected to my laptop. Once the device was recognized it was listed as a connected device on the laptops settings "Devices" (windows 10).

As soon as the recovery screen comes up, however, release the buttons because the default selection is reboot the device and if you keep holding the power button (which is the "select" button in the recovery screen) it will simply do that- reboot.

It took me a couple tries to get the timing, but it did work.

I finally found a solution that works to factory reset the Samsung Galaxy Tab A7 SM-T500. This is the device that will not work with the typical method which is to power off the tablet, then hold down volume up and power until the Android recovery screen comes on.

For the Samsung Galaxy Tab A7 SM-T500 do this:
1. Connect the tablet to a Windows PC with a USB cable while the PC and tablet are powered on
2. Hold the Volume Down and Power buttons until the tablet powers off and you hear the disconnected device sound on the PC
3. Then let go of the volume down and then hold volume up while continuing to hold power
4. The Android Recovery screen load
5. Let go of the buttons
6. Press volume down multiple times to highlight Wipe data/factory reset
7. Then press the power button to select