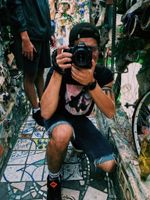 Does anyone know if the HDR10+ feature can be used in Pro Video mode, or is it only available in the standard video mode? ... View more
Mtratchet16
Constellation
in Galaxy S10

So, I love that the Tab S7 series keyboard has expanded on available keys. The new Book Type Cover keyboard has been an improvement by a large margin. I just wanted to focus on the new Fn keys, however. They add an additional functionality--like being able to change your brightness, sound, show your apps or even go to the home screen! My question is this, however: Why does Samsung insist for these hotkeys to be used exclusively in combination with the Fn key? At first it might seem obvious, but think about it.  The home can be accessed through Cmd + D. Recent apps with Cmd + Tab. Whereas, with these function keys, you have to similarly use Fn + F3, or Fn + F2 instead of just being able to press "F3" (for example) to get access to the home screen. I MIGHT not think much of this if keys F1-F12 served some sort of purpose as a standalone key--but THEY DON'T. You have to make JUST AS MUCH EFFORT for these keys as you would a normal hotkey. It's counterintuitive. My goal is hopefully to gain attention, and via firmware/software, we can have the keyboard updated so that only by clicking F1-F12, you can access their functionality. This would be so much quicker, and would give me a reason to use the function keys over the hotkeys (that can vary app-to-app). ... View more
Mtratchet16
Constellation
in Tablets

Re: Re: Camera - Pro Modes Utilize ALL Cameras

thanks so much! ... View more
Mtratchet16
Constellation
in Galaxy S10

Re: Re: Camera - Pro Modes Utilize ALL Cameras

that's so wild man! hopefully we can get more exposure on this (no pun intended) and make some changes for the best 🤘🏼 ... View more
Mtratchet16
Constellation
in Galaxy S10

4 Likes
For Samsung to efficiently compete with the likes of Apple in the pro-photo/video space, they need to allow the pro photo/video modes to utilize ALL cameras; not just the main Wide camera. In pro modes, any zoom is achieved digitally, rather than using the ultrawide or telephoto. While Samsung has allowed more control over photo/video settings than any other smartphone company yet to my knowledge, this feature is very important to me. ESPECIALLY for the next two reasons: 1. When I want photos, I go to the pro mode. Which means I can almost NEVER utilize the ultrawide/telephoto since the pro modes are exclusive to the main wide camera. 2. I'm using an S10. The variable aperture is cool-ish? I like to be able to control it, but I don't get much of a difference, worth the extra hardware. This is likely the reason Samsung dropped the variable aperture with the S20. I initially thought the reason the Pro mode was only with the main camera is BECAUSE it's the only camera with a variable aperture. But the S20 has a fixed aperture, and I never even NEED to change the aperture from 1.4 to 2.2. That being said, I'd much rather be able to utilize the other cameras in pro mode in addition to the main, rather than have control over each camera's aperture (which in my case, I would only be able to control 1/3 apertures). That is a fine tradeoff by all means.  ... View more
Mtratchet16
Constellation
in Galaxy S10