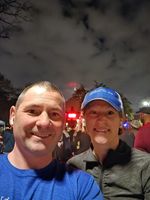 I have it on tmo also. I got tired of it and long pressed on it and set to silent notification ... View more
DgreenJets
Cosmic Ray
in Suggestions

I noticed that it is only on the "home" screen. so whatever is your primary screen ... View more
DgreenJets
Cosmic Ray
in Questions

Re: Software update after I installed beta 2

That is the 2nd beta for one ui 3, you are good ... View more
DgreenJets
Cosmic Ray
in Questions

Re: Galaxy Watch not counting floors

@Muscadel wrote: Dear Galaxy Watch owners   I have solved this riddle, and it is so simple its laugheable, but it works, and I can confirm it keeps working.   Coming From an Apple4 watch, Fitbit Ionic, Garmin Venu, Hauwei GT2, and eventually Samsung Galaxy, I was frustrated and perplexed, as I have the added hurdle of navigating through iOs on my Apple 11 Pro Max, but since the watch itself captures the data, I knws I had to focus there.   Here is the tech bit: Previous gen Barometric sensors counted 9 feet as a flight of stairs, and newer ones 10 feet of continiuous, normal side swining arms moving upwards through 10 feet. This is weid I know, but because you only do 8 to 9 feet in the US per flight of stairs, the next flat step canceles the flight, and you dont get a count.     So the solution is walk(run)whatever, up the flight of stairs, swing arms nomally, dont look at your watch, as you reach the top of the flight, do a "hurrah" lift of your arms, et voila, a few seconds later the flight appear as a "count" on your watch.   Insane, I know, but it works, because by liftin your arms above your head, you add the extra foot or two it needs to count the flight   Have fun out there   PS, Garmin Venu owners, te same solution applies, tried it and it works.. You Sir are a genious!  This has litteraly been bothering me for weeks as I have not been able to get flights since being at work (probably counted because there were multiple flights in a row I needed to climb).  The additional "step and arm raise" at home has done it!!! Thank you!!! ... View more
DgreenJets
Cosmic Ray
in Galaxy Watch