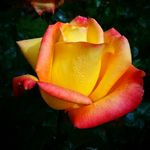 I understand that companies tend to follow the market verses being leaders at trying new things for risk of not making money.  But in this case they are not following the users, if that were the case there wouldn't be such an uproar for taking away the note series and the microsd card slot.  Samsung has many many followers, which are those who are note interested in the iPhone platform.  Apple and Samsung have always had their own niche with having their own followers.  Let's call it what it is....Samsung decided to go cheap on product still charging a fortune for product.  If your going to stay at the same price point your product better stand out, screaming I'm different than my competitor!  Samsung needs to get back to their roots and put some effort in to figure out their next amazing device or simply keep improving the line they were known for to make it better with each new release.  If it's still selling like hot case (note series) then you know that it's a great phone!   ... View more
Samsung Enthusiast
Asteroid
in Other Mobile Devices

2 Likes
If you don't want to loose your place in the smart phone industry, stop trying to be the next iPhone mogul.  iPhone already has mastered their platform and Samsung isn't going to beat what they have already excelled at, hence why the S21 series didn't take off as expected. If, we, the Samsung followers, wanted a minimalist device on the same platform as iPhone, we would just buy an iPhone (they've already perfected their device).  Samsung has their own niche and that's  what sets the 2 companies apart.  You have the die hard iPhone followers and then there's the die hard Samsung followers. The reason being, is that the 2 companies offer such diverse devices...or at least they used to.  For Samsung followers, the intrigue is that the Note series allows for the stylus to be attached "internally" for those who prefer a stylus.  Another major difference that Samsung had to offer, was the ability to add external expansion by use of a MicroSD slot.  Other noticeable features that set them apart was the aux port, included ear buds, included charger, included cable and so forth.  Let alone the mere fact that Samsung is so diverse within it's own line as well; with the options such as; the edge, the flip, the fold, the note and multiples sizes of the standard phone.  When the S21 series came out, all of the highlights mentioned above were discontinued stating that a minimalized series at a lower price point was hitting the market (as if that was something to get excited about).  If you're going to take away all the bells and whistles and rage about how it's cheaper, than the phone should have been way under $1000....like $500 range. I'm sorry, but just because the S21 series was about $300 less than the S20 series, isn't enough to disregard all the features that were removed.  Samsung practically made a simplistic version of iPhone removing all that makes a Samsung, a Samsung.  NOT a smart business decision and I hope that Samsung listen to their followers and returns to what they do best...making phones that are very different than an iPhone. Secondly, where Samsung lacks the MOST, is that of brick-and-mortar locations like that of Apple Corp.  Apple is smart to have stores everywhere in which enthusiast can purchase all-things Apple in 1 location, while having experts on hand to answer questions. This encourages add-ons and impulse purchases when customers see all the devices that they can link together.  Samsung is such a large brand, there is no reason they don't have local stores in every state, bringing many of their product lines together in 1 location.  Experts on site demonstrating how to pair household electronics to phones, tablets and watches creating a plethora of add-ons and impulse purchasing just the same. Please listen to your followers and take to heart what they are stating...if you want there to be future in the smart phone world which also links your wearable devices, remotes and so forth. ... View more
Samsung Enthusiast
Asteroid
in Other Mobile Devices

The Gear S series including the SM-R750 will work on the models before the 21 series phones.  I specifically purchased a note 20 ultra in order for my watch to continue working. ... View more
Samsung Enthusiast
Asteroid
in Galaxy Watch