Tv picture blown out when going from dark to light scene?

HD and UHD TVs
I have a Samsung TU8000 55" TV, and it's great, but for some reason when going from a dark scene in a show or game, and then it cuts to a normally lit scene, the picture gets super blown out to the point it almost looks like a white screen sometimes. It lasts about 10-15 seconds then will fade back to the normal color. This also happens when my Switch dims the screen to save power and when it wakes back up, the tv blows out the image like crazy. I've searched the menus and settings and Google for so long now and can't find anything that even remotely mentions it. The only thing somewhat close to it is auto brightness but I've had that turned off since I got the tv.
It is extremely annoying and the fact that I can't find anything on Google about it is worrying me it's some sort of defect. Anyone else experience this issue/possibly know how to fix it?
0 Likes
Share
Reply
4 Replies
SamsungCaleb
Samsung Moderator
Options


Be sure to click " ✓ Accept as Solution" when you find an answer that works for you.

HD and UHD TVs
From what I've seen, yes it happens on every input. It happened while watching Netflix the other night. It was very noticeable since it was a show with a lot of dimly lit scenes, so whenever it would cut to a normally lit scene it was almost impossible to even see the characters.
It also happens on game mode inputs. I tested it with my Nintendo switch today by letting the screen dim after a few minutes and then moved the cursor so it woke up, and the picture was blown out every time for about 10 seconds. I have images but the camera didn't really capture how extreme it is. In person that green character in the first icon was nearly white.
I haven't really tested any HDR stuff, I don't know much about that, no devices I have support it besides the tv as far as I know. 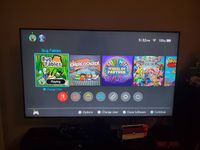 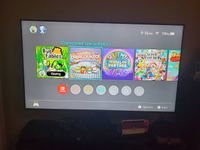 Do you have eco mode turned on? Also, some of our TV's have something called Dynamic Contrast that will automatically make the screen dark and light like the ways your are explaining you can find out more about all the TV's options here:  https://www.samsung.com/us/support/answer/ANS00079295/


Be sure to click " ✓ Accept as Solution" when you find an answer that works for you.

HD and UHD TVs
The Dynamic Contrast seems to be what the issue was! Thank you so much!
0 Likes
Share
Reply
Related Content