Discussions
So the update fixed my wifi issues... to which I am so **bleep**g happy. I wanted to throw the phone away, tbh.
So apparently Samsung galaxy phones were having issues with wifi, slow connection speeds. Apparently it was specifici to Wifi 6 tech. I can now say, I am no longer experiencing the issue 🙌🏽
2 Likes
Share
Reply
6 Replies

Thank you for your Feedback. We appreciate your contribution to the Beta community.

Discussions
Unfortunately, my wifi connection has gotten worse after the update. I have to turn wifi off for pages to load etc.
1 Like
Share
Reply

Discussions
That's what I was experiencing prior to the update. Could never use the wifi at my house, which is wifi 6 technology. I really curious now why it's happening for you.

Have you tried rebooting your router and resetting network settings in your phone? Or maybe if not resetting, just forget that specific Hotspot to "recalibrate" the connection?

If you have a wifi 6 router then you won't see separate bands for your network? Any previous wifi tech would have, as an example: "Fios-Xyz2t 2.4GHz" and "Fios-Xyz2t 5GHz" as available networks, whereas the new wifi 6 router just says: "Fios-Xyz2t" switching between the 2/choosing the most appropriate band automatically.

Anyway, hope this helps you out in some way. I know it drove me crazy... almost returned the phone 😑
1 Like
Share
Reply

Discussions
You may show that it's wifi 6 connection as seen from my screenshot. 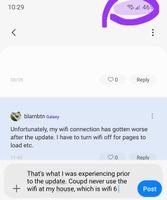 Discussions
Thanks for the insight! My issues occur at home and at work and neither are wifi 6.
0 Likes
Share
Reply