Discussions
Ever since Beta 2 my network went into the garbage, I could have all 5 bars, says 5G or 5G UC and I won't be able to load anything, no apps will work, no webpages not even Google.com will load, it basically became a feature/Flip phone phone, can only use it for talk and text while not connected to WiFi, few times data could work but most of the times it's just dead, it doesn't matter where I go it's bad, places where there's great connections, right across a new T-Mobile tower and it's dead, other phones here works flawlessly, like it should, but not my S21 Ultra on Beta 3, I've changed SIM Cards, T-Mobile checked with me if there's a outage or upgrade I'm the area but they told me all is good and know it's good because other phones works great, I went through all troubleshooting steps with them and nothing helped, anybody has a solution or a temporary fix? Anybody else with the same issue?
PS its soooo bad that I can't ever load this Samsung Members app without being connected to WiFi, I used to be able to load it just fine but it's now dead without WiFi and on 5G
2 Likes
Share
Reply
11 Replies

Discussions
Folks with T-Mobile will need to chime in.

Discussions
The network issue has nothing to do with beta it's a T-Mobile issue. When I'm in a good area 5G UC works fine but when I'm in a rural area where it's not as good or the area is still being upgraded it's weird.. it will still pull speediest fine but webpages are slow to load, apps are slow as well and when it's really bad text will fail to send. I carry an iPhone 13 as well on TMobile as well and when I have issues on my S21 I have the same issues on the iPhone.

On top of this the S21 Ultra has superior connection compared to my two iPhones in general. I can get 5G UC indoors on my S21 where as my iPhones I can only get it if I step outside.

Another note please stop referring to having 5 bars of signal as that is just the quality of the voice connection. Try a cell signal app to see the actual bands you are connected to as well as the signal strength.

A temporary fix would be too go on 4G until the 5G situation where you are gets better. This is very common on T-Mobile Reddit. 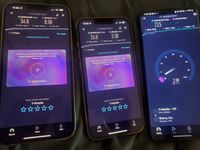 Discussions
As I stated in the OP, places where it has good service and other phones work great this phone is hot garbage data wise and it started by beta 2 and other phones doesn't have the issue so it's definitely a beta issue as it seems
1 Like
Share
Reply

Discussions
I made a post about this in the Tips section.

Go to device settings. Then connecting. Then sim card manager. Deactivate your SIM and wait about 10 seconds. Reactivate the SIM.

It's helped me so I hope it helps you.
0 Likes
Share
Reply

Discussions
Same issues here, it's TMobile network. Some areas are better than others. I'm on vacation right now in a different state and my 5g is amazing I'm also starting to see the UC now too. So TMobile needs to fix their network.
0 Likes
Share
Reply

Discussions
Ya..i would have to agree.. this is not a beta issue but a tmo issue. I was actually on the phone with them off and on for about 3 days last month trying to figure out why I cannot use my phone while at work despite perfect 5 bars of 5g service. It is BS and they need to fix it. But not a beta issue unfortunately
0 Likes
Share
Reply

Thank you for your feedback. If you haven’t already, Please update Samsung members app to latest version from galaxy store and send us an error report immediately after experiencing the issue from the Samsung member’s app -> Beta Feedback -> Error Reports to help us debug the issue. We apologize for the inconvenience and appreciate your contribution to the beta program.