Discussions
As far as I know, there's by far no OneUI 4 beta for the Snapdragon. Mine is from Hong Kong and has the last update, but yet there's no beta enrollment option. Is there any information on when it becomes available if ever?
0 Likes
Share
Reply
7 Replies

Discussions
IDK if Hong Kong was ever one of the official areas they did the beta program in but there are very easy ways to flash the beta ROM. It will wipe your phone and you will have to wipe it again when the final release version comes out but I did it and have been running beta 2 for a while. Just downloaded beta 3 ROM and will update to that soon. Here is a link, but don't do it if you aren't familiar with manually flashing updates. Post in thread 'OTA and Non-OTA Firmware for N986U and N986U1' https://forum.xda-developers.com/t/ota-and-non-ota-firmware-for-n986u-and-n986u1.4143833/post-840499...

Discussions
I don't recommend anyone install a non- official ROM.

Discussions
It's not a "non official rom" the bootloader of the Note 20 is locked so custom or modified roms aren't even possible. This is just using the phones built in "apply update from SD card" option in the recovery menu. And the first thing it dose is spend a few minutes verifying that the update file is a samsung official unmodified update file. So as I said custom or modified ROMs aren't even possible. If the ROM was modified in any way and you somehow got the bootloader to flash it, things like secure folder, Knox, Samsung pay, google pay, probably even Google play and anything that uses Google widevine DRM (Netflix, Hulu, HBO Max etc) would not work. Heck they won't even work if you simply root your phone. Also that "Knox warranty status" would not say official because the e-fuse Knox uses would be blown making my warranty void.

But yeah if anything in the link I posted confuses you in anyway just wait for the final non beta release. You aren't missing much at all anyways. 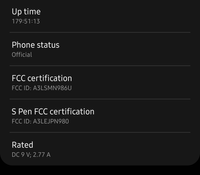 Discussions
Don't even bother the new update is trash I'd rather andriod 11 becuase half of my apps arnt even working such as Google maps🤦‍:male_sign:
0 Likes
Share
Reply

Discussions
Weird. Beta 2 has been rock solid for me.
0 Likes
Share
Reply

One UI 4 Beta Program for Note 20 devices is only for Samsung unlocked devices and is closed.

When ONE UI 4 will be delivered to our devices????