Galaxy S Phones
The Samsung MTP driver doesn't work with Windows 10 x64 build 2004 19041.329
MTP shows up under Other Devices in Device Manager and attempting to install the driver gives me "A service installation section in this INF is invalid." A Samsung Android phone shows in Device Manager but without MTP working nothing can be transferred between phone and computer.
I do have USB for file transfer selected on the phone, which is a Galaxy S8.
I've had to keep a shortcut to wpdmtp.inf on my desktop for quite a while to make it easy to go to the file location, right click and install because it would just quit working randomly. Might go days working, might have to reinstall it several times in one day. Every time Microsoft released a minor or major update I hoped it would include a fix for MTP.
Now with the latest feature update to Windows *it doesn't work at all*. I have downloaded the latest Samsung USB driver from Samsung. I tried Kies, I tried Smart Switch. NOTHING WORKS WITHOUT MTP WORKING.
The identifiers from Device Manager.
USB\VID_04E8&PID_6860&REV_0400&MS_COMP_MTP&SAMSUNG_Android
USB\VID_04E8&PID_6860&MS_COMP_MTP&SAMSUNG_Android
USB\SAMSUNG_MOBILE&MS_COMP_MTP&SAMSUNG_Android
USB\SAMSUNG_MOBILE&MI_00
USB\Vid_04E8&Pid_6860&MI_00
USB\Vid_04E8&Pid_6860&Class_06&SubClass_01&Prot_01
USB\SAMSUNG_MOBILE&Class_06&SubClass_01&Prot_01

I had the same issue  This yt video solved it for me.

If it works maybe bookmark the link 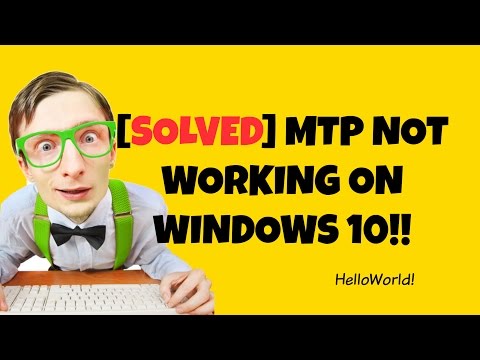 I had the same issue  This yt video solved it for me.

If it works maybe bookmark the link

Well, that worked. On my computer it came up as ADB Device instead of Android Phone and there were two choices for MTP USB so I chose the first one.

I expect that at some point Windows will kick the driver out again so I'll have to do this again. Microsoft and Samsung need to get their act together and FIX THIS permanently.

I've got the same problem since the Windows Update today but this didn't work 😞 I also check in mobile devices but the ist is empty.