Mine got pretty impressive improvement after firmware update

I get this error failed to update firmware on the selected drive.

I have same problem. Week ago i upgraded firmware. Before upgrade ~500 Mb/sec write or read. And now I have ~250 Mb/sec write and read. What can I do?

Same, I cant update I got an error message from Samsung Magician. 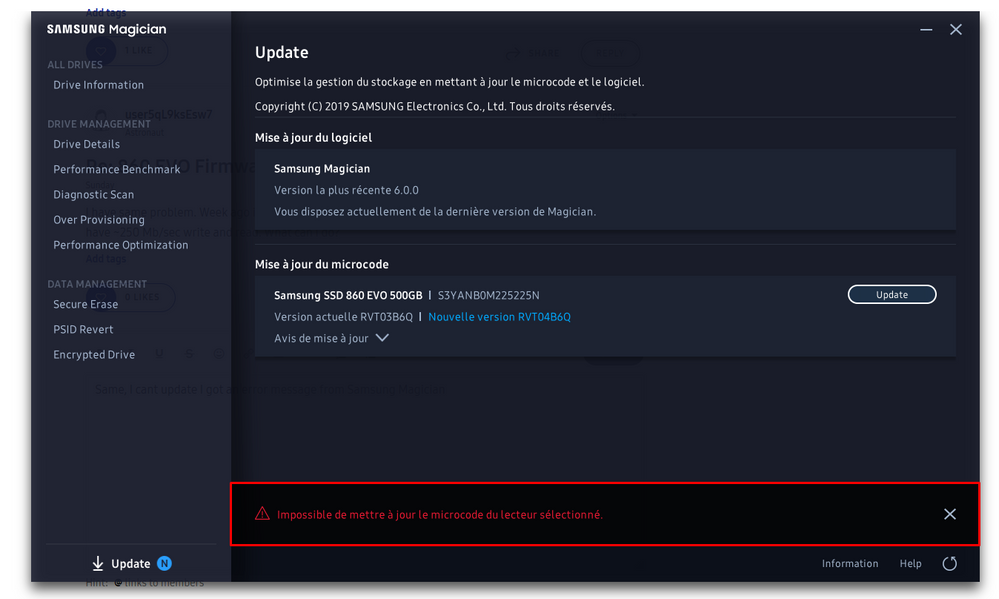 After I got done, and put the Samsung as the Primary drive, I checked and have the RVT03B6Q Firmware, and Magician says it is the latest (doesn't give me the option to update to RVT04B6Q firmware).

how to resolve this problem same here problem

Same, I cant update I got an error message from Samsung Magician.

Same here.  Both my desktop computers have 860 EVO SSD set up as the system drive.  The first was prompted to update Magician a couple weeks ago, and subsequently the firmware update.  I backed up everything then did the firmware without issue.  Later after backing up the second computer, I updated Magician, but I get this error message when trying to update the firmware.  I tried to run the benchmark with Magician to see if it would find some issue to allow the firmware update to work, but the benchmark just causes Windows to lock up.

Should I keep trying to update firmware or not risk fragging the drive?

I've just finished the update procedure and it's OK for me. It even fixed big problems of detection by my controller marvell.
But I've updated Samsung Magician to version 6.1 if it can help.

DON"T DO IT!!! Upgrading my EVO 860 resulted in a whopping 90% preformance drop. I now have an SSD that is the speed of a HDD. Samsung destroyed my drive.

Geez, after reading all these messages I wonder if I should even bother upgrading my 860/500Gb drive from RVT01B6Q.  The s/w says a firmware upgrade is available but it fails to upgrade.  I'm using Magician 6.1.

Any ideas where I can get RVT03B6Q and do a manual update to that version?  TIA.