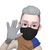 Galaxy Buds
I can only see a single number, but they definitely each have individual battery right? How do I see both. I want to see the case charge too.
I can't see any of these in the Galaxy wearable app, only one number for both. Is that the minimum battery of both, or just the right ear? Is the right ear actually the most important one 🤔, what's with this.

Galaxy Buds
Thanks everyone, saw that all things everyone suggested were true in certain situations within the Samsung Wearables app.

The Samsung SmartThings app shows the percentages for both headphones at all times, it only shows the case battery when one earbud is charging in it.

Thanks everyone for the pointers and help.

Galaxy Buds
I only see 2 battery :battery: percentage. One for the case and one for the buds. I don't see 2 different percentages for each bud. I have the buds 2
2 Likes
Share
Reply

Galaxy Buds
You should be able to see the battery percentage in the galaxy wearable app,
https://www.samsung.com/us/support/answer/ANS00078081/
2 Likes
Share
Reply

Galaxy Buds
Oh thanks for the response. The picture in the link really helps troubleshoot. I know where that is.

I looked at that spot in my galaxy wearables and it only shows the earbuds battery as a single number with no case life. 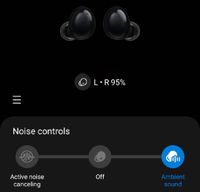 Galaxy Buds
But I believe that the first generation of galaxy buds may not show the battery percentage https://m.youtube.com/watch?v=MmRbI5y28e4
2 Likes
Share
Reply

Galaxy Buds
Strange I double checked and the box definitely says Buds2. My device name also put Buds2 by default. I disconnected and reconnected and it did show case life but only that instant.

Galaxy Buds
Ah thanks! Do you know if the number shown for Buds2 is just randomly one of them, or the minimum/maximum of the two?
0 Likes
Share
Reply

Galaxy Buds
I believe that it is a combination of both of them since they are charged equally in the case at the same wattage
https://www.samsung.com/levant/support/mobile-devices/galaxy-buds-charging-tips-and-precautions/
1 Like
Share
Reply

Galaxy Buds
Ah yep I let one charge alone and I could see two numbers one for each earbud. In addition with what PoliticsMan said above, the case charge appears too during this. Thanks for helping figure this out.

As soon as I take all earbuds away from the case, the case charge goes away and the two buds appear as a single number, seems like the minimum.
0 Likes
Share
Reply